Aiden’s Legacy and Texas Roadhouse raise over $40,000 to benefit the Children’s Hospital Foundation

Aiden’s Legacy and Texas Roadhouse raise over $40,000 to benefit the Children’s Hospital Foundation 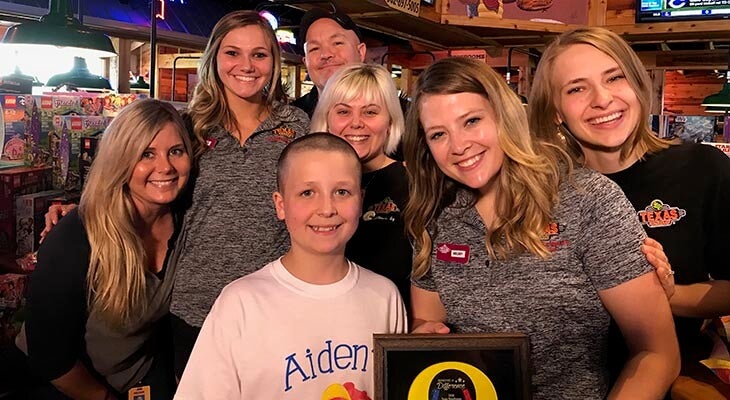 For the fifth consecutive year, Aiden’s Legacy has joined forces with Texas Roadhouse restaurants in the Greater Louisville and Southern Indiana area to host a fundraising event. The amount raised this year surpassed all other years — totaling $40,037.27.

Part of the money raised is used to purchase Legos that will be distributed to children fighting cancer. Aiden Johnson, of Aiden’s Legacy, is a two-time cancer survivor. While enduring his many hospital stays during his cancer treatment, he found peace and comfort in playing with Legos.

Want to help? Donate to the Children’s Hospital Foundation on behalf of Aiden’s Legacy.

“Legos are a luxury to a child fighting cancer,” said Gena Johnson, Aiden’s mother. “Many families are struggling financially while also facing the overwhelming challenge of having their child fight cancer. We’ve been there; we understand. To have a smiling face walk into your room with a gift for your child like this is breathtaking.”

In addition to the Legos, Aiden’s Legacy will use the donations to fund equipment for the Addison Jo Blair Cancer Care Center at Norton Children’s Hospital and share Legos with more kids, such as those who attend Camp Quality, a summer camp for childhood cancer survivors.

The springtime collaboration between Texas Roadhouse and Aiden’s Legacy started in 2013. At the time, Aiden was battling his second round of cancer. That year, Texas Roadhouse raised $4,000. Restaurateurs wanted to do more. They quickly committed to another year, and then another, and another. Before they knew it, the affiliation had raised $115,046.52.

Aiden told WLKY news that he is happy to share Legos with fellow cancer fighters. He said he hopes it makes them happy while they are going through a difficult time in their life.