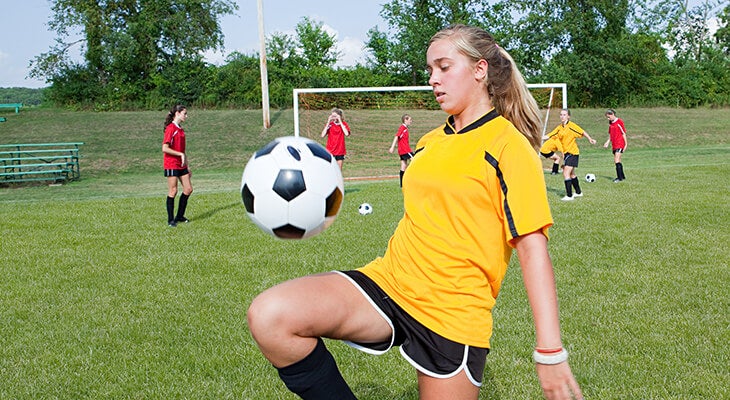 Youth soccer in the United States has exploded in popularity since it emerged decades ago. But as the number of players has increased, knee injuries and other ailments have soared as well.

According to a 2016 study in the journal Pediatrics, the annual injury rate for young soccer players jumped by 111 percent since 1990. More than 70 percent of those injuries were in older children, ages 12 to 17. In addition, this age group was three times more likely to be injured than younger players.

According to Dr. Brey, injuries are more common in girls than in boys.

“Girls have higher rates of significant knee injury, such as an ACL tear, compared with boys,” she said. “The concussion rates are similar, however the rates for boys seem to be dropping faster than the rates for girls.”

Experts say the increase in ACL (anterior cruciate ligament) injuries among girls is due to a lack of neuromuscular strength training. Among other factors, girls also tend to have less control at the hip and tend to land with their knees in an inward position, which can increase their risk for knee injuries such as ACL tears.

“There is some evidence that participating in specific balance and strength training can help prevent some ACL injuries, but this is not always available,” Dr. Brey said. “Overuse injuries, such as achy knee pain during running, are usually best treated by conditioning programs during the off-season as well as rest and anti-inflammatories during the season. Physical therapy also can be very helpful in these situations.”

What to do if your child has a knee injury

Fellowship-trained orthopedists have the experience and expertise to treat the unique needs of growing bones and joints.

Dr. Brey said the first step is to have a medical professional, such as the school’s athletic trainer, evaluate your child. If the knee swelled quickly and the athlete is unable to put weight on it, they need to go to an emergency room or immediate care center. X-rays likely will be taken to rule out a fracture.

“If there is concern for a meniscus or ligament tear, an MRI will need to be ordered by the primary care physician or by an orthopedic surgeon,” Dr. Brey said. “Initial treatment usually consists of a knee immobilizer, ice and crutches. ACL and meniscus tears typically require surgery and anywhere from three to 12 months of recovery.”

If it’s not a tear, most athletes can return to the pitch in a matter of weeks.

“Fortunately, the majority of knee injuries don’t require surgery,” Dr. Brey said. “Most athletes with mild ankle or knee sprains need to rest and elevate the injury. As long as they listen to their bodies, they should be able to return to action soon.”