A new pediatrician option in Crestwood and south Oldham County

A new pediatrician option in Crestwood and south Oldham County

A working mom herself, Dr. Mattingly brings crazy socks and a passion for children to Oldham County’s newest pediatrician office 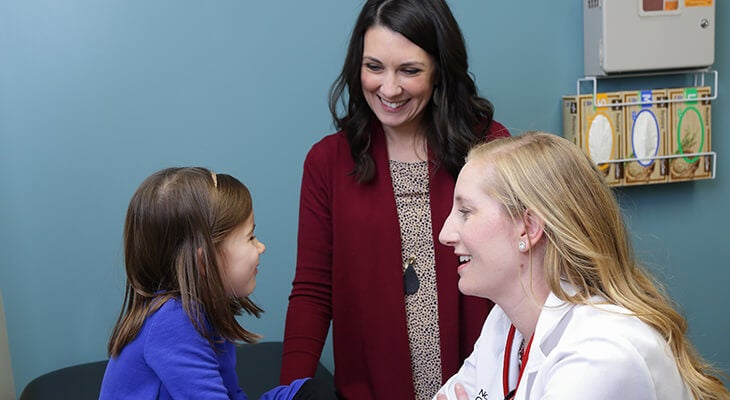 When April R. Mattingly, M.D., walked into her pediatrics rotation as a medical student at the University of Louisville, she knew she belonged.

“There was nothing else I wanted to do,” said Dr. Mattingly, who is raising two young children of her own. “It’s such an optimistic place to be. Kids make work fun.”

As the newest pediatrician in Crestwood, Kentucky, in Oldham County, Dr. Mattingly brings her crazy socks and supply of stickers along to make her young patients laugh.

She recalls one of her first patients, a young boy who needed a strep test but was fighting the throat swab with everything he had. She was able to get the sample but hated to see him upset.

She returned with the results a short time later. He greeted her with a smile and a picture he’d drawn for her.

“You’re like Spiderman,” the young patient said, “because you’re cool.”

“Here I was feeling so worried about him and he was just so resilient,” Dr. Mattingly said. “At least the swab was not in vain — he did have strep throat.”

As a working mom, she understands the scheduling demands on today’s families.

Both her children — daughter, Gabbi, age 7, and son, Ben, age 4 — have had medical issues of their own. When parents come to her with a problem, she is ready to listen and help.

“I can relate to being that parent in the hospital,” Dr. Mattingly said. “My kids have had their share of trials, so I always tell parents there are no stupid questions. I have been there.”

Close to home and school in south Oldham County.

In her spare time, Dr. Mattingly is learning to crochet (putting dinosaur spikes on her son’s crocheted hat). She also loves to volunteer at her kids’ schools and Northeast Christian Church, where she is a member.

Her obsession, however, is with tackling obesity in children. Earlier in her career, she worked for a company that helped children manage their weight to avoid medical complications. She worked with a dietitian, a psychologist and an exercise physiologist to help children and parents focus on diet and food planning, physical activity and supporting each other emotionally.

Dr. Mattingly understands how hard it can be to make healthy food choices over cheaper, convenient and less healthy ones. She still loves to educate and support parents and children on choosing better foods and keeping everyone healthy.

“It takes an extra effort, but we have a generation of kids that won’t live as long if we don’t start making better choices now,” she said. “Prevention is key.”

A big part of that prevention is as simple as getting regular checkups with a pediatrician.