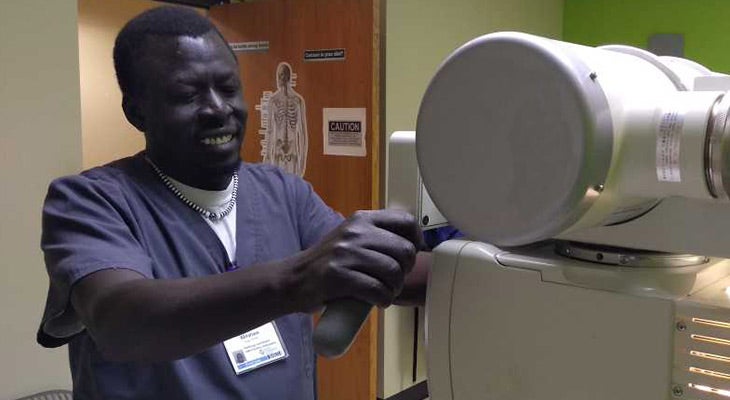 Abraham Aluel greeted 5-year-old Hunter with a smile. The young boy, there to get an X-ray of his leg, extended his hand. Abraham took it. There was an instant bond between the two as they strolled off to the X-ray room at Norton Children’s Orthopedics of Louisville.

It’s been quite a journey for Abraham, a radiology coordinator, to get to this point.

“When I was Hunter’s age, we didn’t argue about what toy to play with,” he said. “We argued about if we were going to have food that day.”

Abraham is known as one of the Lost Boys of Sudan. At just 9 years old, he was one of 20,000 boys who fled their homes in the 1980s to escape a genocidal civil war. More than half died during their thousand-mile journey on foot to neighboring Ethiopia. They spent the next decade living in mud huts with no electricity or running water. Many survived by sucking the water out of mud.

“It was horrible, but you had no choice,” Abraham said.

Their first chance at freedom arrived in 2001 when several thousand refugees came to the U.S. Abraham was among the hundred or so who found a home in Louisville. All he owned was what he had on his back.

Learning a new home and a career

In 2003, Abraham started working in the environmental services department at Norton Healthcare before moving into a position in sterile processing. He also enrolled in school to become a radiology technologist — tuition paid by Norton Healthcare. After graduating, Abraham started working at Norton Children’s Orthopedics of Louisville. His specialty — aside from taking X-rays — is lightening the mood with a little humor.

He also found a passion for helping others.

“I love working with kids,” said Abraham, who is married and has five children of his own. “I come into work with a smile on my face because I feel good helping patients.”

Abraham loves his patients, and they love him back. In fact, he was named a recipient of the 2019 “Commitment to Compassion” award, sponsored by the Partnership for a Compassionate Louisville. The award, given to only a handful of health care professionals each year, recognizes those who improve the lives of those around them, and inspire and challenge others to be compassionate in all they do.

“What he’s gone through to get where he is today is pretty amazing,” said Sarah DuPlessis Young, physician assistant with Norton Children’s Orthopedics of Louisville.

Giving back to his homeland

Despite being thousands of miles away, Abraham hasn’t forgotten about Sudan. It’s still dangerous there, but he’s returned every year since 2007.

At night, he works extra so he can send money back home to his family. He also hopes to build a school in his former village.

“We cannot turn our back, because we know the life we went through is really horrible,” he said. “God protected us getting here. We have to give back.”