Driven by research, new drugs and treatments changed the lives of many of the children under the care of Diane Burnett, APRN. 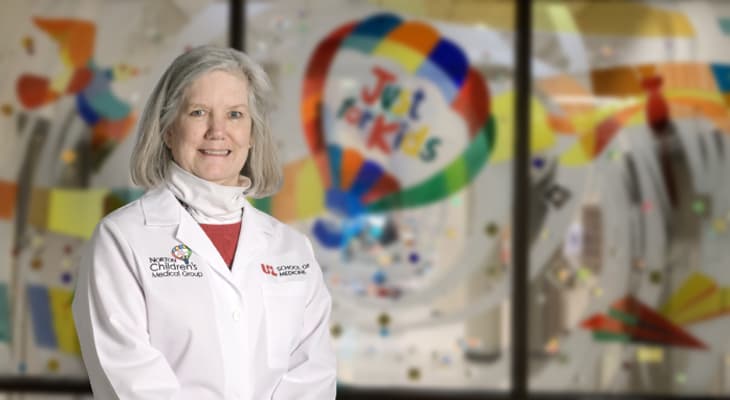 Thirty-nine years ago, Diane Burnett, APRN, wasn’t sure she was cut out to care for kids with cancer and blood disorders. Give it a year, she figured.

“I didn’t know if I would be a good fit for that,” Diane said.

As it turned out, she was, and Diane’s job became a passion. One year turned to another and another, and Diane retired as a nurse practitioner recently after nearly four decades at Norton Children’s Cancer Institute, affiliated with the UofL School of Medicine.

“They would show up happy. They didn’t get discouraged. They just encouraged us to be the best for them,” she said.

During Diane’s career, medicine evolved. Driven by research, new discoveries brought new drugs and treatments and changed the lives of many of the children under Diane’s care. Conditions that once offered little hope became treatable.

“It was really neat to see how the medicine and the treatment changed through the years to improve outcomes,” Diane said.

One example is acute lymphoblastic leukemia (ALL), the most common childhood cancer. In the 1980s, only about half the children with ALL survived five years with the disease. Now more than 90% do.

Preventing hemophilia bleeds rather than reacting

The lives of children with the blood-clotting disorder hemophilia have been transformed as well. When Diane started, the best she and her colleagues could do was try to stop the patient’s bleeding once it started.

As researchers figured out hemophilia’s different genetic risk factors, treatments became tailored for each patient. Improvements in medications mean some children with hemophilia can take shots to prevent bleeds, instead of only receiving treatment after a bleed starts. As a result, these children can live relatively normal lives.

“That really was a drastic improvement,” Diane said.

The daily lives of cancer patients during treatment improved as well. Children receive ports for their chemotherapy instead of needing to get their chemo through IVs. Anti-nausea medication improved, along with treatments to boost the immune system.

Excitement as the field developed, but times of heartbreak too

According to Diane, she enjoyed working with cancer and hematology patients during a time when their care was revolutionized.

“Things were always changing. I was always learning. That’s what I loved about hematology-oncology,” she said.

Diane’s job was not without heartbreak. During the AIDS crisis in the 1980s, before the disease was fully understood, some children with hemophilia who received blood transfusions became infected with HIV.

“It was really sad to lose patients and tell parents their children had HIV,” Diane said.

Since then, Diane has seen children with hemophilia thrive, and sometimes she has cared for former patients’ children as well.

“It was really neat to have that family trust and for them to show up with their children,” Diane said.

Originally from Illinois, Diane has built her life in Louisville and plans to spend her retirement catching up with family and friends. She’s been watching a new granddaughter and helping plan her daughter’s wedding.

Diane said she’s glad to be retired but grateful for the career she had.

“I think the career picked me. I was at the right place at the right time, and I couldn’t see myself doing anything else,” she said.