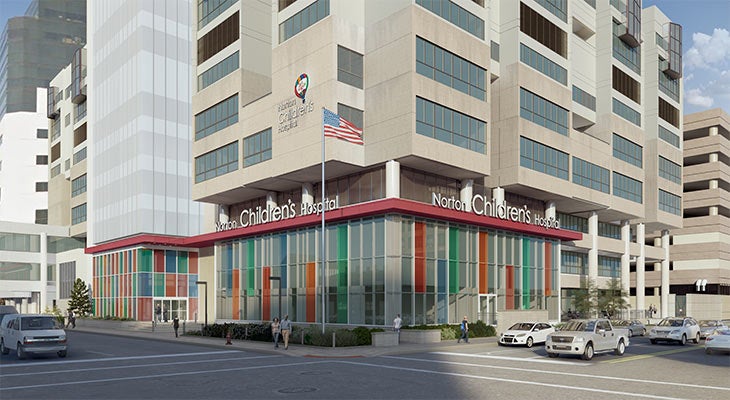 Norton Children’s Hospital is expanding to improve critical care services for children and grow its family-centered approach to treating the region’s sickest kids.

Norton Healthcare announced plans to invest $78.3 million to create the Jennifer Lawrence Cardiac Intensive Care Unit (CICU) and renovate the “Just for Kids” Critical Care Center and two of the neonatal intensive care units (NICUs) at Norton Children’s Hospital. The changes will occur in phases, with full completion in 2021.

“We are always striving to improve, and this project will bring additional areas of our facility up to the same level of excellence as the care offered by our doctors, nurses and other staff,” said Thomas D. Kmetz, division president, Women’s and Children’s Services and Norton Children’s Hospital. “We’ve designed these new units to include family-oriented amenities, such as private rooms, play areas and other spaces to stay during their time here. Norton Children’s Hospital always aims to provide the very best approach to care, and this project gets us much closer to that goal.”

“Our community has done such a fantastic job of making sure local children have access to the best treatment available,” said Lynnie Meyer, Ed.D., R.N., CFRE, chief development officer, Norton Healthcare. “We’re so grateful to the Lawrence Family Foundation and many others for leading the way by furthering the mission of Norton Children’s Hospital.”

This latest project will allow Norton Children’s Hospital to strengthen services to the more than 1,400 critically ill and premature infants who come to the hospital each year for NICU services, as well as a growing number of patients who need specialized services at the Norton Children’s Heart Center and “Just for Kids” Critical Care Center. Between the new CICU and PICU, total critical care capacity will grow from 26 to 38 beds and will position the facility to care for the sickest of children well into the future.

The first step will involve creating a new 7,000-square-foot conference center on the first floor, using much of the space previously occupied by a restaurant. It also will include building out the exterior of the hospital at the corner of Floyd and Chestnut streets. Construction will begin in May.

The new conference center will open up space on the sixth floor to accommodate a 24-bed medical and surgical unit, which is currently on the fourth floor. The unit is expected to be completed at the end of 2018 and will include all private rooms and separate playrooms for young children and adolescents.

The Jennifer Lawrence Cardiac Intensive Care Unit will be constructed on the fourth floor and will feature private rooms dedicated to children recovering from heart procedures, open heart surgery including heart transplant and heart failure, and other conditions requiring intensive care. The 17-bed unit, which will include three neonatal rooms, will offer space for families to stay with their children. Expected completion is the end of 2019.

Norton Children’s Hospital also will complete the remaining phases of renovations to the NICU and the Intermediate Care Nursery. The NICU project will convert the remaining 29 beds to a family-centered model of care and is expected to be complete in summer of 2019.

For the final component, Norton Children’s Hospital will turn attention to the “Just for Kids” Critical Care Center. The critical care renovations include transforming patient bays into private and semi-private rooms, as well as creating new space for physician and nursing education. This piece is slated to be completed in summer 2021.