Stella was home for five weeks when the unthinkable happened — she stopped breathing. 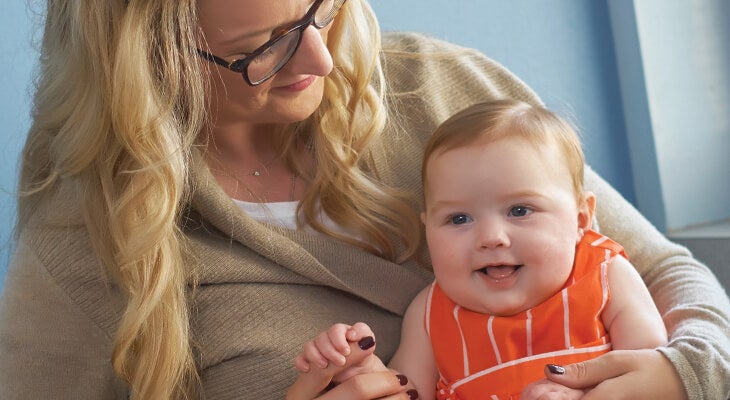 Surviving everything Stella Paul has been through in her one year of life is nothing short of a miracle. But her biggest miracle came on July 23, 2018, when a family made the difficult decision to donate their child’s heart.

Learn more about Norton Children’s Heart Institute, affiliated with the University of Louisville, or schedule an appointment.

Before Stella was born, her parents, Mari-Elise and Bruce Paul, knew she had congenital heart disease and would need surgery early on. After she was born on Nov. 15, 2017, and spent some time in the Norton Children’s neonatal intensive care unit, Stella was cleared to go home. Her heart condition would be monitored until she grew strong enough for surgery.

Stella was home for five weeks when the unthinkable happened — just days after Christmas. She stopped breathing. She was rushed to Norton Women’s & Children’s Hospital, where Wilson E. Reinke, M.D., pediatric hospitalist with UofL Physicians, and others resuscitated her and stabilized her for transport to Norton Children’s Hospital. There she would be cared for by pediatric cardiology specialists with Norton Children’s Heart Institute, affiliated with the University of Louisville.

Hearing the news, Stella’s cardiologist, Joshua Sparks, M.D., with UofL Physicians, rushed to her side from home on his day off.

“What wasn’t detectable right after birth became evident,” Dr. Sparks said. In addition to having holes in her heart, Stella’s heart muscle was very weak and not pumping enough blood to her body.

She underwent surgery to reduce the amount of extra blood going to her lungs through the holes, but it wasn’t enough. Her heart function declined, and she developed heart failure. She required IV medication to keep her alive.

Her best chance for survival was a heart transplant.

“On the outside, Stella looked great, but on the inside things were not right,” Mari-Elise said. “We couldn’t tell until something went very wrong. It was a scary and frustrating time.”

The life-changing call the Pauls had been waiting for would come on July 21. Serendipitously, that morning Mari-Elise, a yoga instructor, held a “Stretch for Stella” fundraising event at Hot Yoga Louisville to raise funds for the Jennifer Lawrence Cardiac Intensive Care Unit, currently under construction at Norton Children’s Hospital.

Mari-Elise answers the phone and, right away, knows the reason for the call: A heart had become available.

“The phone call was highly anticipated, yet surprising,” Mari-Elise said. “It was hard to process. It was the call we had been waiting for, but the thought of sending your child into such a serious surgery was scary. They would be taking out the heart she had been born with.”

Over the coming hours, the reality of it all weighs heavily on the Pauls.

“You are relying on the death of someone to save your own child,” Mari-Elise said. “That’s impossible to get comfortable with.”

The lifesaving gift of an organ is never guaranteed until it’s received, so Mari-Elise and Bruce had waited to tell their family. They decide now is the right time to share the news.

Surgery is delayed until later that night. Stella has been fasting since the night before and is given Pedialyte. It’s going to be a long day of keeping a hungry baby occupied.

Mari-Elise and Bruce can only imagine the circumstances from which the heart became available. More than 300 kids in the U.S. also are waiting for new hearts. Their thoughts are with the donor family.

Things are ramping up. Stella is cleansed with special wipes to start prepping for surgery. Grandparents and close friends gather. Nick and Caitlin Alexander, parents of heart transplant recipient Eli Alexander, stop by to offer support.

Deborah J. Kozik, D.O., one of Stella’s transplant surgeons from UofL Physicians, arrives. She will be heading out to retrieve the donor heart. Grandparents and Bruce help Mari-Elise process all of the emotions. 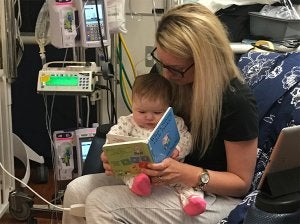 The family gets a much-needed laughter break as Mari-Elise reads a book to Stella. The book talks about a hungry baby. Stella wonders why everyone is laughing! 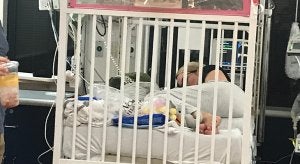 Mari-Elise crawls into bed with Stella — anything to help comfort her and share some snuggles before surgery. 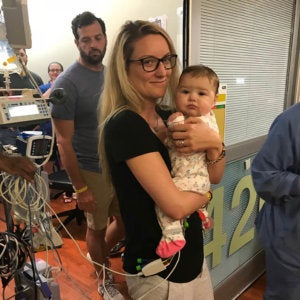 Mari-Elise and Bruce carry Stella into the operating room, hugging and kissing her, telling her to be strong and that they will see her in the morning with her new heart.

Renae Akins, R.N., organ transplant nurse clinician, updates the family that Dr. Kozik has seen the donor heart and believes it’s a good match. She is on her way back with it.

Dr. Kozik’s inspection of the heart is the cue for Erle H. Austin III, M.D., cardiothoracic surgeon, to begin prepping Stella for her new heart. She is placed on a bypass machine once the new heart arrives.

Renae keeps the family updated throughout the night.

After a long night of waiting, Renae informs the family that Stella is off bypass and Dr. Kozik is closing her incision.

Dr. Kozik reports to Mari-Elise and Bruce that surgery went well and Stella’s new heart is beating on its own.

The Pauls get to see their beautiful baby again. They listen to her new heartbeat.

“This experience has made us appreciate each day with Stella,” Mari-Elise said. “What we’ve been through puts life into perspective, and we are so grateful for the donor family — there are no words to express our deep gratitude.”

In October, Stella went home to start her new life with her new heart.