Once they read the girl’s adoption file, they believed she was meant to be their daughter and they’d name her Victory for the obstacles she had overcome. 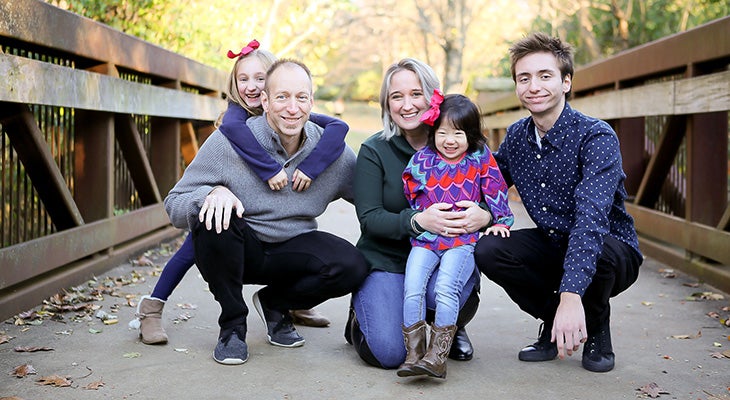 Since she was a child, Jenni Haynes wanted to adopt a baby girl from overseas.

That dream recently became reality. In April 2018, Jenni and her husband adopted a 2-year-old girl from China who had survived cancer as an infant.

The girl’s right arm was amputated when she was 5 months old after she was diagnosed with infantile fibrosarcoma, a rare tumor that develops from cells that produce connective tissue.

Jenni and her husband were prepared to adopt a child with a special medical need. Once they read the girl’s adoption file, they believed she was meant to be their daughter, Jenni said. They decided to name her Victory for the obstacles she had overcome in her short life.

Thriving and on the look out

The now 3-year-old is thriving. Victory undergoes scans for cancer every six months at Norton Children’s Cancer Institute, affiliated with the University of Louisville.

Kerry K. McGowan, M.D., pediatric oncologist and hematologist with UofL Physicians – Pediatric Cancer and Blood Diseases, is monitoring enlarged lymph nodes pressing on Victory’s jugular vein. The enlargement appears to be a reaction to allergies and not a sign of cancer reoccurrence, Jenni said.

A few days before one of Victory’s doctor visits, the girl told Jenni her neck hurt. As a physical therapist who helps cancer patients with lymphedema reduce swelling, her stomach dropped when she felt several enlarged lymph nodes.

Learn about career opportunities and the positive culture at Norton Healthcare.

“Once your child has had cancer, any enlarged lymph nodes are nerve wracking,” Jenni said. “I was reassured by Dr. McGowan’s confidence that the enlargement was due to allergic reaction.”

“I’m grateful that Norton Healthcare recognizes that some of its employees want to grow their family through adoption,” Jenni said. “They’re helping with something that is a need worldwide. There are so many children in the world who need a family.”