People with scoliosis have a side-to-side curve in the spine that can look like an "S" or a "C."

The spine is sometimes called "the backbone," but it's not just one bone. It's made of lots of bones (called vertebrae) that are connected by a type of elastic tissue called cartilage. This gives people the flexibility to bend, stretch, balance, and even walk.

Scoliosis is when the vertebrae form a curved line instead of being straight. Sometimes they also rotate (twist), like a corkscrew. 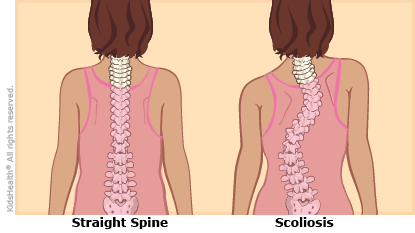 Small curves usually don't cause problems. But a curve that gets worse can be bad for a person's health. Very large curves can damage the joints and cause arthritis of the spine. Large curves can make the ribs rub against the pelvis, causing pain. If the spine curves a lot, people might get lung problems.

Kids of any age — even infants — can have scoliosis. The most common kind of scoliosis is called idiopathic scoliosis. It's usually found when people begin going through puberty.

Idiopathic scoliosis is a bit of a medical mystery. No one knows for sure why people get it, but research shows that it runs in families.

Idiopathic scoliosis isn't caused by things like carrying a heavy backpack, bad posture, playing sports — or anything else you might do. You don't have control over whether you get scoliosis. It's in your genes.

What Are the Signs and Symptoms of Scoliosis?

Sometimes scoliosis is easy to see. A curve in the spine can make the body tilt to the left or right. If you have scoliosis, it might look like you are leaning to one side. Some people have one shoulder higher than the other or one shoulder blade that sticks out more than the other. If your spine is twisted, one side of your ribcage might stick out more when you bend over.

Often, scoliosis isn't obvious. That's why health care providers do a scoliosis exam as part of your regular checkup. Some states have school-based scoliosis screening programs.

How Is Scoliosis Diagnosed?

Your health care provider may refer you to an orthopedic specialist. These experts treat diseases of the bones and muscles. They see lots of teens with scoliosis and can decide if you need treatment.

Severe curves can affect the lungs. Orthopedic specialists usually can work with patients to prevent curves from getting to this point.

How Is Scoliosis Treated?

Most mild scoliosis curves don't need treatment. If you have a mild curve, you'll need to go for regular checkups to be sure it doesn't get bigger. Scoliosis is more likely to get worse while your bones are still growing. So your health care provider will want to keep an eye on you as you grow.

If your health care providers think your curve might get worse or cause problems, they'll probably want you to wear a back brace until you finish growing. The brace doesn't make an existing curve go away, but it can stop it from getting worse.

There's no quick fix for scoliosis. Wearing a brace or recovering from surgery takes a while. For some people, this can be tough. If you'd like, your care team can put you in touch with other people who have gone through the same thing or help you find support groups.

There are several different types of braces. If you need a brace, the orthopedic specialist will decide on the number of hours you'll wear it each day and night.

The brace acts as a holding device that keeps a curve from getting worse. A brace won't make your spine straight. But if it does its job well, your curve won't get bigger.

If you're getting a brace, your care team will work with you to choose the right one. The right brace is the one that works best for the type of curve you have — but it's also the one you're most likely to wear. So make a list of questions and concerns to discuss with your care team, and let them know all the activities you like to do.

Wearing a brace correctly can prevent the need for surgery.

Some teens with severe scoliosis need a type of surgery called a spinal fusion. During the operation, an orthopedic surgeon straightens the spine as much as possible and holds it in place with rods and screws. The surgeon then puts in bone graft to join (fuse) some of the vertebrae together. That way, the curve can't get any worse.

After about a year, the bones should be fully fused. The metal rods are no longer needed, but they stay in the back because they aren't doing any harm and taking them out requires another operation.

When treatment is over, people with scoliosis are able to live full and active lives. As long as people get the right treatment as kids or teens, their spine usually won't continue to curve after they're done growing.

Some teens with scoliosis wear a brace to help stop their curve from getting worse as they grow. Find out more about how scoliosis braces work and how long people wear them in this article for teens.

A spinal fusion is a surgical procedure that's done to stabilize or straighten the bones in the back. It can help some teens with scoliosis.

Our bones, muscles, and joints form our musculoskeletal system and enable us to do everyday physical activities.