What Is Lyme Disease?

Lyme disease is an infection caused by a tick bite. The infection can lead to problems with the skin, heart, brain, and joints.

Do All Tick Bites Cause Lyme Disease?

What Are the Signs & Symptoms of Lyme Disease?

The symptoms of Lyme disease vary from person to person, but often happen in three stages:

1. For the first few weeks, symptoms may include:

2. After a few more weeks, untreated Lyme disease can lead to: 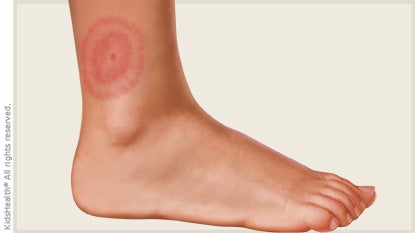 Who Gets Lyme Disease?

Anyone bitten by an infected deer tick can get Lyme disease. Most U.S. cases of Lyme disease happen in Connecticut, Delaware, Maine, Maryland, Massachusetts, Minnesota, New Hampshire, New Jersey, New York, Pennsylvania, Rhode Island, Vermont, Virginia, and Wisconsin. But Lyme disease is found in other parts of the U.S., Europe, Asia, and Australia too.

How Is Lyme Disease Diagnosed?

It can be hard for doctors to diagnose Lyme disease because:

Doctors can diagnose early Lyme disease if they see a tick bite and rash. Blood tests usually aren't helpful in the first month of Lyme disease.

Depending on the symptoms, doctors might order other tests, such as a spinal tap, which looks at the fluid around the brain and spinal cord.

How Is Lyme Disease Treated?

Treatment depends on the stage of Lyme disease.

What Is Post-Lyme Disease Syndrome?

Post-Lyme disease syndrome (also known as chronic Lyme disease) is when someone with Lyme disease still has symptoms after treatment with antibiotics. The symptoms are most likely caused by an autoimmune response. This is when the body's germ-fighting immune system attacks the body's own cells.

Most people with post-Lyme disease syndrome usually get better with time, but it can take months to feel well again.

Can Lyme Disease Be Prevented?

Not all cases of Lyme disease can be prevented. But you can help protect your family from tick bites. If you go into an area where ticks live, be sure to:

How Can Parents Help?

If your child is diagnosed with Lyme disease, give the antibiotics exactly as the doctor directs. And because people can get Lyme disease more than once:

How Can I Protect My Family From Ticks?

Find out what the experts say.

Boy, your child's freckles really stand out in the sun — yikes, that one is actually a tick! What should you do?

Some ticks carry harmful germs that can cause disease. Find out what to do if your child is bitten by a tick.

Rocky Mountain spotted fever (RMSF) is a disease caused by a bacteria that is carried by certain types of ticks. Learn about the signs and symptoms of RMSF and tips for preventing infection in this article.

How Can I Prevent Lyme Disease?

Does the thought of Lyme disease make you worry about enjoying the great outdoors? Here's some information to help you lower your risk for Lyme disease.

The best way to prevent Lyme disease is to prevent tick bites. Find out more about this disease and how to keep those ticks away.

Lyme disease can be treated if it's caught early. Find out what causes it, how it's treated, and how to prevent it.

A tick attaches itself to the skin of a person or animal and sucks blood. If you have a dog, it may have picked up a tick before! Learn more about ticks in this article for kids.