Double outlet right ventricle (DORV) is a heart defect where the aorta connects to the heart in the wrong place. DORV is a congenital heart defect, which means a baby who has it is born with it.

Along with the misplaced aorta, babies with DORV also have a ventricular septal defect (VSD), a hole in the wall that normally separates the left and right ventricles.

Babies born with DORV almost always show signs of the problem within a few days of birth. Surgery is needed to correct the problem.

The heart does these jobs using two blood flow loops:

After the blood becomes oxygen-rich in the lungs, it returns to the left ventricle, ready for another loop through the body. 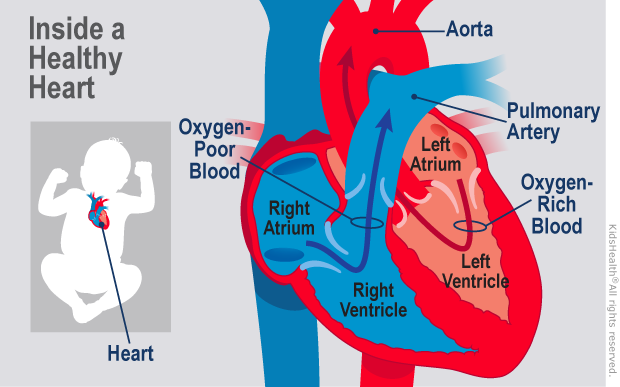 When a baby's heart has DORV:

With each heartbeat, the right ventricle squeezes the mixed blood out to the lungs through its normal outlet (the pulmonary artery) and out to the body through the misplaced aorta. The mixing of oxygen-rich and oxygen-poor blood makes the heart with DORV work harder than a normal heart usually does.

The position and size of the VSD and the positions of the pulmonary artery and aorta are different for each baby. So some babies with DORV have more severe symptoms than others.

What Are the Signs & Symptoms of Double Outlet Right Ventricle (DORV)?

Within a few days of birth, a newborn with DORV usually will show these signs:

DORV is due to an error in the way the heart forms very early in pregnancy. Why this happens is unknown. It isn't caused by anything a mother did or didn't do during her pregnancy. Doctors and scientists have not yet found a way to prevent DORV.

In most cases, DORV happens with no known cause. Babies with certain genetic conditions — such as trisomy 13, trisomy 18, or DiGeorge syndrome (22q11.2 deletion) — are more at risk for DORV.

If the diagnosis is made after the birth, it's the baby's skin color and breathing problems that indicate a problem. Doctors listening to the baby's heartbeat may hear an abnormal sound (a murmur) and use these tests to look at the baby's heart:

In some cases, a cardiac catheterization is needed.

Babies with DORV often have more than one heart problem. So while doctors check to see how the outlet vessels and VSD are arranged, they will also look for other problems.

Surgery is needed to correct DORV. Medicines might help the heart work better, but a baby with DORV cannot get better for long without surgery.

The main types of surgery used are intraventricular repair, arterial switch, and single ventricle pathway. More than one surgery might be needed to get the heart working as well as possible.

The arterial switch repair moves the aorta from the right ventricle to the left ventricle. The VSD is closed to keep oxygen-rich and oxygen-poor blood from mixing in the ventricles.

In some cases many surgical steps (called the single ventricle pathway) are needed to balance blood flow in a baby with DORV:

In very rare cases, surgical repair isn't possible and a heart transplant may be recommended.

What Else Should I Know?

Extra pressure on blood going to the lungs of babies with DORV can damage the lungs' blood vessels and lead to heart failure. Because problems like this and others are likely, infants with surgically corrected DORV must continue to see a cardiologist (a doctor who treats heart problems) through childhood, adolescence, and adulthood.

Are you heart smart? Learn about this amazing muscle, including how to care for kids with heart conditions.

When Your Child Needs a Heart Transplant

If your child needs a heart transplant, you're probably feeling lots of emotions. Fortunately, many kids who undergo heart transplants go on to live normal, healthy lives.

A guide to medical terms about the heart and circulatory system. In an easy A-Z format, find definitions on heart defects, heart conditions, treatments, and more.

The Glenn procedure is open-heart surgery done as the second of three surgeries to treat hypoplastic left heart syndrome (HLHS).

The Fontan procedure is open-heart surgery done as the third of three surgeries to treat hypoplastic left heart syndrome (HLHS).

Usually, a heart has two working ventricles (pumping chambers). Having a single ventricle means that only one of the two ventricles works well enough to pump blood.