When do boys start puberty?

When do boys start puberty?

Boys are starting puberty earlier. Learn what you can expect from puberty in boys and how to talk about puberty and sex. 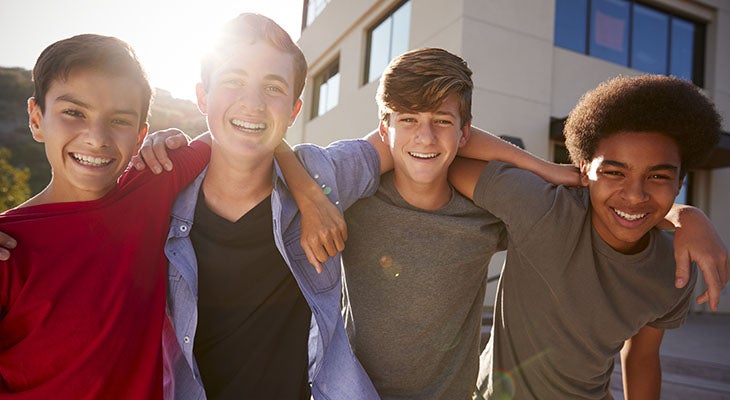 Most discussions around puberty tend to focus on girls, but boys are starting puberty earlier, too. A 2012 study of U.S. boys found white and Hispanic boys were entering puberty at an average age of 10, and African American boys at 9. That’s up to two years earlier than decades ago. (The study couldn’t determine why.) Boys typically go through puberty from ages 9 to 14, with the entire process taking three to four years. Most boys will start puberty by 11½ years old.

If your son starts puberty before the typical age range, take him to the pediatrician for a physical. While there could be no reason for the early onset, it’s important to rule out any conditions that could cause puberty to start early.

Preteen and teen boys go through a lot of changes during puberty: everything from growth spurts to growing hair in new places. As the body changes, boys can expect:

How to talk to boys about puberty –– and sex

Parents need to offer advice but often find it uncomfortable to talk about puberty and sex. Some just assume their sons will figure it all out on their own. But the longer you wait, the harder it becomes. Younger kids actually can be easier to talk to because they’re open and don’t yet have preconceived notions about sexuality.

Before your son reaches his teens, teach him the correct names and functions of male and female sex organs, how puberty changes the body and the risk of pregnancy or getting sexually transmitted infections. These talks should go on over time and anytime your son wants to talk. Avoid postponing or putting off these conversations because it’s not a good time for you. Here are some conversation starters:

Still stumped on the best way to broach the topic? Take a look at the American Academy of Pediatrics’ website HealthyChildren.org. It offers a wealth of information and guidance for both parents and children.

Puberty is tough on kids –– pay attention to their needs

During this time, also be sensitive to your son’s need for privacy. Preteens often become more modest while bathing or showering and changing their clothes. His interest in grooming and appearance may increase as well.

Be respectful and avoid good-natured teasing. Also respect your child’s wish for privacy, not only as it relates to his changing body but in other areas as well, such as knocking before entering his room.