Stick with the tried-and-true, doctor-recommended way to remove a tick from a child. 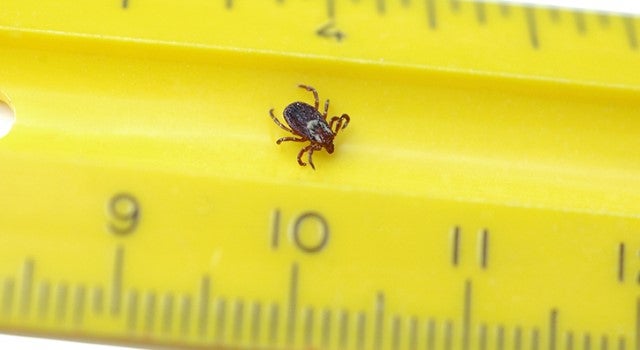 Are you planning on spending more time outdoors this summer? You may want to be ready to know how to remove a tick from a child.

Ronald Paul, M.D., division chief of emergency medicine at Norton Children’s Hospital and professor of pediatrics at the University of Louisville School of Medicine, explains how to remove a tick from a child.

“Ticks are all different sizes, so giving your child and yourself a good once-over at the end of a day outside is important,” Dr. Paul said. “This can be done during bath time for children or when getting cleaned up and ready for bed.”

Most ticks can be seen relatively easily, but they do like to hide in hair on the scalp and warmer areas such as armpits. Dr. Paul advises that parents look for black bumps on the skin and scalp. Some can be very small. Ticks will start to imbed into the skin headfirst.

Use the tried-and-true method to remove a tick from a child or adult.

“Home remedies are not recommended,” Dr. Paul said. “Using petroleum jelly, dish soap and other strategies are not as effective and can cause skin irritation.”

According to Dr. Paul, in a doctor’s office he would use a curved hemostat or small forceps, but at home parents can use tweezers to remove the tick.

Clean the area and the tweezers.

Get the tweezers as close to the head of the tick as possible.

Pull directly up and away from the skin to remove the tick. Do not pull the body of the tick, because squeezing the body can allow the tick to regurgitate the contents back into the bite, possibly causing infection. It also increases the chance the head will detach and stay imbedded in the skin.

Wash the affected area with warm soap and water once you have removed all of the tick.

Be sure to grasp the tick by the head. If you aren’t able to get the whole tick out, try removing any debris with a sterilized needle. In rare cases, swelling and redness may develop at the site of the bite — a sign there could be an infection. If that happens, see your physician for possible treatment, which may include an antibiotic.

Individuals with frequent exposure to pets who spend time outdoors and people who live near high grass or wooded areas may be at increased risk for infection.

Children under 10 years old, people with compromised immune systems and people who receive delayed treatment are at an increased risk for serious health problems from Rocky Mountain spotted fever.

Dr. Paul explains that the first symptoms of Rocky Mountain spotted fever begin two to 14 days after being bitten by an infected tick.

“Most tick bites are usually painless, and about half of the people who develop Rocky Mountain spotted fever do not remember being bitten,” Dr. Paul said. “The disease frequently begins with a sudden onset of fever and headache resulting in a visit to the doctor during the first few days of symptoms. Because early symptoms may be nonspecific, several visits may occur before the diagnosis is made and correct treatment begins.”