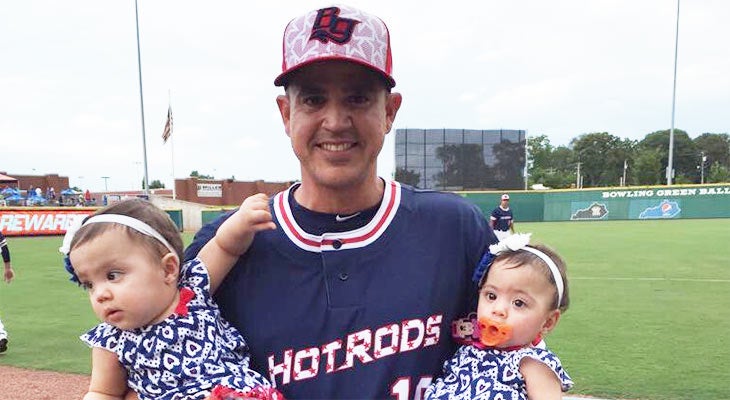 This time of year Reinaldo Ruiz is typically focused on America’s pastime. The manager of the Bowling Green Hot Rods, a minor league affiliate of the Tampa Bay Rays, is preparing his team for another long baseball season. But this year Ruiz has something else on his mind: his daughter Renata.

When Renata Ruiz was born in September 2015, her doctor soon realized the newborn was not getting the oxygen she needed. Her heart condition — tetralogy of Fallot — was discovered when she was just 2 days old.

Tetralogy of Fallot is a congenital heart condition that limits blood flow, and therefore oxygen, to the rest of the body. In Renata’s case, she had a large hole between the two pumping chambers of the heart and an obstruction of flow to the lungs. The condition can be diagnosed with a prenatal echocardiogram. However, a clear image of Renata’s heart couldn’t be captured due to how she and her twin sister, Luvia, were positioned.

Tetralogy of Fallot is rare but one of the most common heart defects. About 1,660 U.S. babies are born with it each year.

Renata started having hypercyanotic spells during which, due to a drop in oxygen to the lungs, she would turn blue.

“She was getting worse and worse because every time she cried it wasn’t allowing blood to her lungs,” Reinaldo said.

“When they start having these spells, something has to be done,” Dr. Austin said.

Dr. Austin placed a small tube between the main arteries of her heart and lungs. Known as a Blalock-Taussig shunt, this procedure allows increased blood flow to the lungs. Renata spent 17 days in the “Just for Kids” Critical Care Center at Norton Children’s Hospital recovering from her surgery.

The procedure allowed her some time to grow, gain strength and become a better candidate for the corrective procedure — the tetralogy of flow repair.

After Renata was released from the hospital, the family returned to Bowling Green.

Reinaldo recalled, “She did well, she gained weight and got stronger.”

Since then, the Hot Rods have rallied around Renata and dozens of other Bowling Green kids with heart conditions. The team has become very active in Brave Hearts, a local support group, by having patients throw out ceremonial pitches and hosting special events for their families.

“They’ve offered to help and have prayed for us. The entire organization knows my situation and they’ve been very supportive. They want me to take care of my family first. As soon as everything is fine with Renata they want me to come back to work, but not until then,” Reinaldo said.

Renata returned to Norton Children’s Hospital for her second procedure in February 2016. This surgery closed the hole between the two pumping chambers of the heart and opened the pathway from the right pumping chamber to the lungs.

Renata is scheduled for a third procedure in April, where Dr. Austin will remove some additional muscle. The survival rate for the procedure is better than 99 percent.

“Dr. Austin is unbelievable,” Reinaldo said. “The group that works with them is amazing, and the way they treated us — they took care of us, and they took care of my daughter. I know she’s going to be in good hands.”

While the need for the third procedure is relatively uncommon, Dr. Austin feels confident that Renata will go on to lead a normal life, free of restrictions. After all, Olympic gold medal snowboarder Shaun White was born with the same condition.

“I don’t know if she’ll be a snowboarder, but I wouldn’t hold her back. Maybe she’ll be a baseball player,” Dr. Austin said.