We take a lot of deep breaths

We take a lot of deep breaths 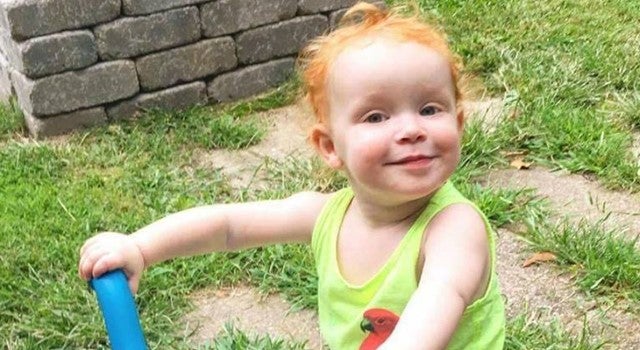 I found out when I was 23 weeks pregnant that Joslyn had Ebstein’s anomaly, a congenital heart defect that I also have. We were under the impression that it wasn’t hereditary — but evidently that’s not entirely true!

At 33 weeks I went in for an ultrasound and her heart was above 300 beats per minute. I was admitted and given some medicine hoping that would lower her heart rate and it didn’t. So, on Christmas Eve 2014 we had an emergency C-section and she spent 5½ weeks in the neonatal intensive care unit.

She not only had a heart defect, but they found out she had Wolff-Parkinson-White syndrome, which is what caused the accelerated heartbeat. This condition causes SVTs — supraventricular tachycardia — the heart just slips out of normal rhythm and beats so fast.

As an infant she can’t bring herself out of it. The only way we know at home is by listening with a stethoscope. One of the best ways for us to help her get out of it is to put ice packs on her face.

I saw Dr. Kim, a pediatric electrophysiologist, throughout my pregnancy. We actually both have the same cardiologist! It’s really convenient because we don’t have to have extra appointments. We can listen to Mommy’s heart and then listen to hers. I’ve known him for several years and now my daughter gets to get to know him. That’s pretty cool.

Having a newborn with a CHD

Having a newborn with a congenital heart defect affects the whole family. It’s really hard. I didn’t get a lot of sleep — watching her for every symptom, listening to her heart morning, noon and night, and she had to have special medicine every 6 hours on the dot. Trying to do that on top of a normal baby schedule, it was hard, really hard.

On several occasions she would slip into an SVT at night.  We have spent a whole lot of time at the children’s hospital. When we couldn’t get her out of an SVT we would have to rush to the hospital and usually had an overnight stay.

The very first episode of SVT that Jocelyn had at home, our 5-year-old son, Jaxon, actually told us. We listened to her heart throughout the day and on this particular day he listened first in the morning.  Of course he always wanted to help mommy and he turned to me and said “Mommy, I think she is in SVT.”

I told him, “Well, let’s listen” and oh my God she was! She had just woken up and from the outside you could never tell; she was just a normal happy baby. But when he listened to her heart that morning he knew it wasn’t right it was way too fast.

It has tested our relationships with each other as a family. It was really hard on my son. He was used to Mommy being there all the time and then I wasn’t there all the time because I would have to be with his baby sister, whom he also barely got to see.

I had to quit my job, [my husband] had to work double time and still manages to take care of our son, come and visit our daughter, and then still make it to work. So you can imagine it tested our relationships more than anything. It was tough. We have a really amazing big family who lives in town.  We are very fortunate. Grandmas, grandpas, sisters, brothers — everybody helped out. Honestly, if they weren’t here I don’t know what would have happened or how we would have made it. But we made it.  We are making it. We made it work.

Anything can trigger it

If you looked at her you would never know. It’s terrifying. We have watched the heart monitor go 300 plus beats per minute and then all of a sudden it flat lines — it’s terrifying.  On several occasions when we went to the hospital if we couldn’t get her SVT to stop they would give her a drug, adenosine. It is designed to get her heart back to its normal rhythm. It has a very short life, so it instantly goes in an IV and then “reboots” her heart. But she has to flat line. It’s pretty crazy to see. But they had to do it several times in her short life. About twice a month since she was born, we have had to go back to the hospital. I will say, fingers crossed, we have gone five months without one. I don’t want to jinx it.

It’s really hard, as anything can trigger it. Illnesses, if she gets a cold, if her brother brings something home from school, if she gets sick, anything can trigger it. She actually threw herself into an SVT a couple of times with temper tantrums! It’s crazy. She is a toddler. I always think, “I will give you anything. What do you want? Ice cream? Anything. I will give you anything if you will just stop,” but it’s so hard to stop a baby from a temper tantrum.  It’s hard because she can’t just eat anything. Like she can’t have too much chocolate. I scoop her up when a bunch of kids are around at Jaxon’s school just so we don’t pick up germs. But I have to. It’s hard.

We have been to the hospital too many times to count. It’s always bittersweet. We LOVE all of the nurses. Her doctors are phenomenal. If I could give them all a gold trophy, I would. But it is bittersweet because I think, “Here we are again. Who is going to watch Jaxon? Is my husband going to be able to take off of work? Are we going to be able to make the money to pay the bills?”

Honestly, looking at her eyes I think, “OK I have to be positive; I have to do this for her. I have to be super mom.” I can’t not be. She needs to see that I’m strong so that she can be strong. It can be hard for her to feel safe and secure in that environment. She has always been in such a good mood in the hospital even with a bunch of needles in her.

I always like to think that me trying to stay positive for her is what helped her get through all of that. I like to tell myself that — even if it’s not entirely true! We are all strong mommas and we have to support each other no matter what. There are days I think I’m just going to throw in the towel! But you can’t do that.  You have to be a strong momma no matter what. There are days I’m barely floating here, but I’m sure if I feel like that I can only imagine how my husband feels, how my son feels, how Joslyn feels! We do a lot meditation. A lot of deep breaths.