Nearly half of women who die by homicide in the U.S. are killed by a current or former intimate partner. A new study in JAMA Pediatrics shows that adolescent girls are at risk for intimate partner homicide (IPH). 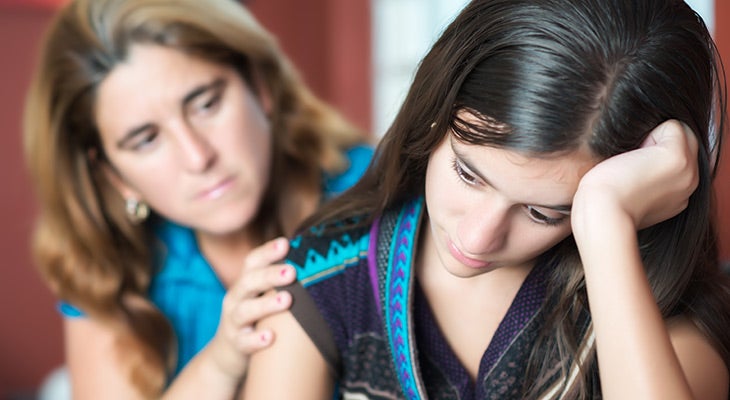 Nearly half of women who die by homicide in the U.S. are killed by a current or former intimate partner. Now a new study in JAMA Pediatrics shows that adolescent girls are at risk for this serious type of violence, intimate partner homicide (IPH). Intimate partner violence (IPV) is a serious issue that can lead to IPH — learn how to spot abusive behavior before it can escalate.

The study showed that of 2,188 adolescents killed between 2003 and 2016, 150 adolescents, age 11 to 18, were killed by current or former intimate partners. Of those IPH victims, 90% were female, and their average age was 16.8. Nearly 78% of the perpetrators were 18 years old and older, and nearly 63% were current intimate partners of the victim. Firearms, specifically handguns, were the most common weapons used in the crimes. The most common circumstances were that the victim was initiating a breakup or refusing to engage in a relationship with the perpetrator, as well as perpetrator jealousy of the victim.

What is intimate partner violence (IPV) and teen dating violence?

According to the Centers for Disease Control and Prevention (CDC), IPV is a serious preventable public health problem that affects millions of Americans and can last a lifetime. It often starts in the teen years, and can start as soon as people start dating or having intimate relationships. IPV that starts in adolescence is called teen dating violence. IPV, also commonly called domestic violence, can include four types of abuse perpetrated by a current or former partner — spouse, boyfriend or girlfriend, dating or sexual partner — including:

It’s important to understand that some forms of IPV (for example, types of sexual violence, psychological aggression, including coercive tactics and stalking) can be perpetrated electronically through phone conversations, texting and social media. Examples can include excessive texting, monitoring a partner’s phone or posting sexual pictures of a partner online without consent.

Getting help for teen dating violence

If you or someone you know is experiencing emotional, physical or sexual abuse, or if you feel like you are in danger, you can call or text the National Teen Dating Abuse helpline.

To be connected with a professional who can help:

Teens also can chat with someone for help at LoveIsRespect.org.

Teens often may think some behavior is a normal part of a relationship, such as teasing and name-calling. However, these behaviors can become abusive and develop over time into serious forms of violence, up to homicide. Teens often do not report their discomfort with unhealthy behaviors because of being afraid to tell family and friends.

How to prevent intimate partner violence — and what parents can do

Young people need to learn what both healthy and unhealthy relationships look like and the importance of speaking up if dating violence occurs. Dating violence does not discriminate — it can happen in any type of relationship, including a relationship that is serious or casual, monogamous or polygamous, short-term or long-term, gay or straight.

“Parents should have open and honest communication with children about relationships long before they start dating,” said Rachel Mattaline, licensed clinical social worker with Norton Children’s Medical Group – Broadway. “Parents can outline what healthy and unhealthy relationships look like — and what their child should do if they feel like a partner is hurting them in any way.”

According to LoveIsRespect, a project of the National Domestic Violence Hotline, there are four elements required for a healthy relationship: respect, equality, safety and trust (R.E.S.T).

These elements of R.E.S.T., as a general rule, can be considered healthy and positive if they exist in the relationship without condition, exception, pressure, and you can respond or act in a way that makes you comfortable.

Signs of an unhealthy relationship

If R.E.S.T elements exist with conditions, exceptions, pressure, or if you feel that you can’t respond or act the way you want, the relationship can be unhealthy. For example, an unhealthy version of respect might be talking about your partner to other people differently than you would if he or she were in the room. An example of an unhealthy version of equality may be one partner saying that it’s only fair that one partner makes the decisions because he or she makes more money (or has a more stressful job or schoolwork, etc.), without discussion or coming to that agreement as a couple. Unhealthy safety could be one partner insisting the other doesn’t go out alone, then follows the other partner without the person’s consent. Unhealthy trust may look like a person asking to read the other partner’s texts.

Other red flags of abusive dating relationships include:

What can parents do if they suspect their child is in an unhealthy or abusive relationship?

Your child or child’s partner may start to exhibit some signs that can help you identify that there is something wrong with their romantic relationship, including:

If you notice some of these signs, it can feel natural to react — but what may seem like the best way to stop the abuse may stop the conversation before it starts. Parents can: