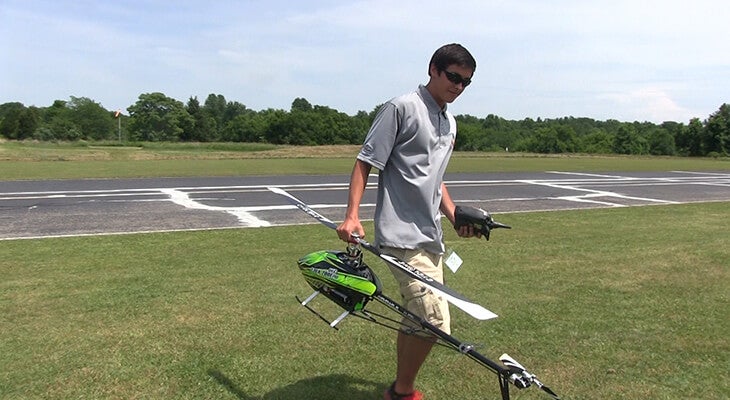 Back in 2004, I was driving along with my son Ethan, who was 2 years old at the time. As we were passing an airfield, I noticed a banner advertising the Wings For Kids Radio Controlled Air Show, benefiting Norton Children’s Hospital.

As young as Ethan was, he had expressed a love for anything that flies in the air. When someone asked him what his favorite thing was, he wouldn’t say just airplanes. His quick and excited response was he loves “airplanes, jet planes and helicopters!”

I knew when I saw that banner that he would absolutely love it and we had to go. Little did I know, as much as Ethan loved every moment since the first event, it would become something that moved our lives in a major direction.

The annual air show, held by the River City Radio Controllers, has a wide array of exciting flying exhibitions featuring in-air dogfights and combat, aerobatic airplanes and vintage airplanes. The air show features nationally recognized pilots from throughout the Midwest and beyond who demonstrate their flying skills and model aircraft for the public. In addition to the flying, there are numerous other fun activities for the whole family, including candy drops from radio controlled airplanes, inflatables, face painting and flight simulators.

Now 14 years later, this year will mark our family’s 15th Wings For Kids Air Show. We never missed a year, and many times we attended both days! Each year, I would videotape the shows. Throughout the years, Ethan would watch those videos over and over until the next show. This event had become one of our major highlights of the year.

Soon we started visiting the field to watch River City Radio Controllers (RCRC) pilots fly. When Ethan was 5 years old, he began learning to fly aircraft on a simulator. He got his first radio-controlled starter plane soon after. By age 12, he got his first helicopter. Now Ethan is a highly skilled pilot, flying all forms of aircraft, and is able to do amazing acrobatics. He is sponsored by a couple of radio control hobby companies, attends events all over the country and is active on online hobby forums, where he instructs and guides other people. He has made friends with fellow pilots from all around the world!

Not only have we become big supporters of Wings For Kids, but we have shared a love for the hobby itself that has created a strong bond through the years. It also has become like a career to Ethan.

The journey began so long ago. The many years of attending the Wings For Kids Air Show has been a joy and an amazing experience. Ethan, who once was a spectator at the shows, who ran out on the field to scoop up treats at the candy drop, has grown up. He’s now performing as a pilot in the show. It is a great honor for both of us to be a part of it. We are so fortunate to be able to help support the great cause of supporting Norton’s Children’s Hospital.