Are you making the switch too soon? 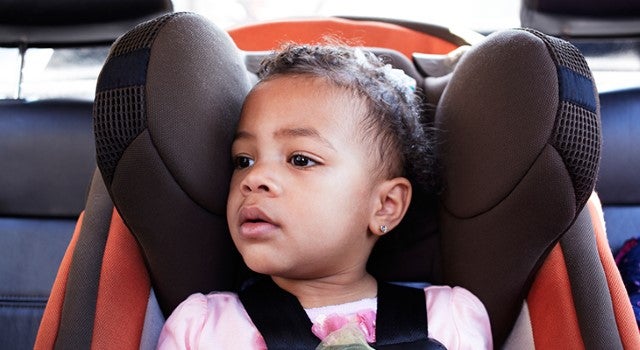 Keeping our children safe is priority No. 1 for most parents. But keeping them happy and comfortable is a priority, too. So when kids grow big enough that you think it’s time to switch their car seat from rear- to forward-facing, stop a second before you make the switch.

In the event of a car crash, young children, especially those age 2 and younger who are not in a rear-facing seat, are at risk for a host of severe and even life-threatening injuries.

The American Academy of Pediatrics recommends that children in this age group remain rear facing in their car seats. Some rear-facing seats can accommodate a child up to 40 pounds.

Sharon Rengers, R.N., with the Children’s Hospital Foundation Office of Prevention & Wellness, illuminates the potential injury risk to a young child who is not rear facing in the event of a crash.

“A young child’s head is larger and heavier in proportion to his body than that of an older child. In a frontal crash, the head moves abruptly forward, placing increased forces on the neck,” Rengers said.

A rear-facing car seat is designed to distribute the forces of a crash, and support and cradle the entire head, neck and back of a child during a frontal crash.

Reducing a child’s risk for injury by such a substantial percentage should take precedence over other reasons to switch to forward-facing, such as a desire to see your child’s face, wanting the child to see out the window or worries about lower leg injuries in a crash.

Lower leg injuries are rare, and taller children can sit easily in a crossed leg position while rear-facing.

“While great strides have been made in reducing child fatalities and injuries,” Rengers said of car crashes, “over half of the children killed are improperly restrained or unrestrained.”

A child who is seated in a properly installed car seat is five times more likely to survive a serious crash and have less serious injuries.