A new start with new heart 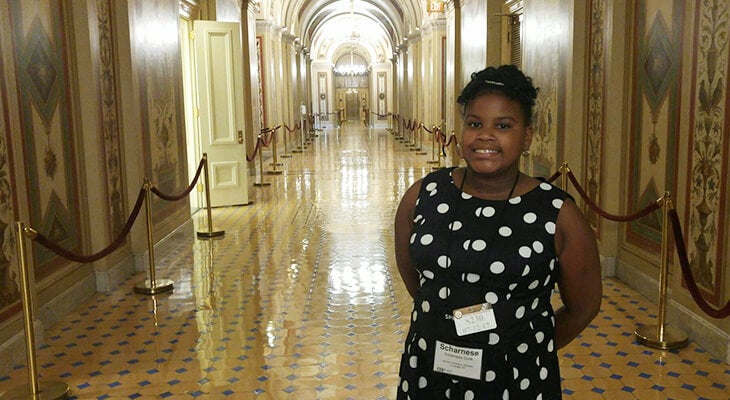 At age 8, Scharnese Cook was very active. She ran track at school and was involved in various activities. Then she began to have trouble breathing. At first, it appeared to be a severe asthma attack. The situation became critical when emergency medical workers found that her pulse was much too fast. A chest X-ray revealed that Scharnese had an enlarged heart.

Or stop by Norton Children’s Hospital — we’ll be in the lobby!

Tests at the Norton Children’s Hospital emergency department revealed Scharnese had congestive heart failure. Doctors diagnosed her with dilated cardiomyopathy. Her heart chambers were enlarged and her heart was pumping only one-fourth the normal amount of blood.

Scharnese was admitted to Norton Children’s Hospital’s “Just for Kids” Critical Care Center, where she was put on medication to control her symptoms. The medication worked initially, but after a week, she started passing out in the hospital.

Her health was rapidly declining. Scharnese was put on the heart transplant list.

While she waited, she received a ventricular assist device (VAD), a special pump that is surgically inserted into the heart. The VAD removes blood from the left side of the heart and pumps it to the body. It also allowed Scharnese to move around, eat and get stronger while she waited for a new heart.

After about four weeks on the VAD, on June 26, 2016, specialists at Norton Children’s Hospital and UofL Physicians performed a heart transplant. Just two weeks later, Scharnese left the hospital — only eight weeks after the ordeal began.

Scharnese, now 11, has a new start with a new heart. In July 2017, she and her mother, Shilese, even made it to Washington, D.C., to represent Norton Children’s Hospital during Speak Now For Kids Family Advocacy Day.