The donation will support the Norton Children’s Hospital Level I Pediatric Trauma Center. 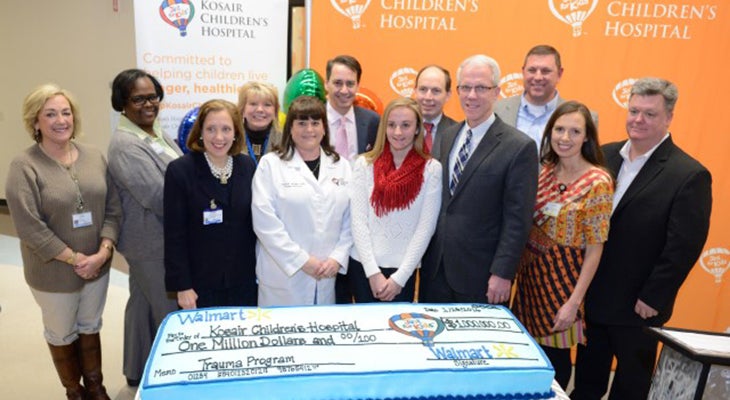 The hospital is home to the only Pediatric Trauma Center in the western half of Kentucky and Southern Indiana. Nearly 90,000 children a year seek care from the emergency medicine specialists of Norton Children’s Hospital. Of those, more than 1,000 need the services of the downtown Level I Pediatric Trauma Center. These children have experienced complex injuries such as accidental and nonaccidental blunt force trauma; penetrating injuries, like gunshot wounds, crush injuries and musculoskeletal and spine injuries; and closed head and traumatic brain injuries. This also includes a growing number of children who have experienced child abuse.

“Walmart has been a great community partner in supporting Norton Children’s Hospital since 2007,” said Lynnie Meyer, Ed.D., R.N., CFRE, executive director of the Children’s Hospital Foundation. “We’re thankful that the entire organization has seen the importance of providing this advanced care for children and for taking a leadership role in making it possible.”

Trauma centers offer a wide range of services and include specialties found throughout a children’s hospital. These include emergency, surgery, intensive care, anesthesia, radiology and pastoral care.

“Taking care of a critically injured child requires many different resources, from specialists to equipment and even facilities,” Meyer said. “Walmart’s support allows us to ensure we have what is necessary to take care of children of all sizes with all kinds of injuries, whenever we’re needed.”

In addition to the now $2 million for the Pediatric Trauma Center, Walmart has previously supported imaging services. As a donor through Children’s Miracle Network Hospitals, individual stores throughout the region also provide support to Norton Children’s Hospital.

“At Walmart, we believe in leveraging our strength to help others,” said David Combs, Louisville Walmart market manager. “The team at Norton Children’s Hospital does incredible work with children here in the commonwealth, and we are proud to continue contributing to their cause.”

Support for the Pediatric Trauma Center has also been given through the Children’s Hospital Foundation by the Petrino Family Foundation that was established by U of L Head Football Coach Bobby Petrino and his family, as well as the WHAS Crusade for Children.

About Philanthropy at Walmart
Walmart and the Walmart Foundation are committed to helping people live better through philanthropic efforts. By operating globally and giving back locally, Walmart is uniquely positioned to address the needs of the communities it serves and make a significant social impact within its core areas of giving: Hunger Relief & Healthy Eating, Sustainability, Career Opportunity and Women’s Economic Empowerment. Walmart and the Walmart Foundation are leading the fight against hunger in the United States with a $2 billion commitment through 2015. Walmart has donated more than 1 billion meals to those in need across the country. To learn more about Walmart’s giving, visit foundation.walmart.com.

About Norton Children’s Hospital
As Kentucky and Southern Indiana’s only full-service, free-standing pediatric hospital, Norton Children’s Hospital, along with its predecessor hospitals, have cared for children for more than a century without regard to their families’ ability to pay. The hospital also is an advocate for the health and well-being of all children. The 267-bed hospital serves as the primary pediatric teaching facility for the University of Louisville School of Medicine. In 2007 and 2012, Norton Children’s Hospital received the prestigious Magnet designation recognizing excellence in nursing from the American Nurses Credentialing Center. More information is available at NortonChildrens.com.