Non-Hodgkin lymphoma can occur at any age, but it is most common in younger children. This type of cancer is diagnosed two to three times more often in boys than in girls. 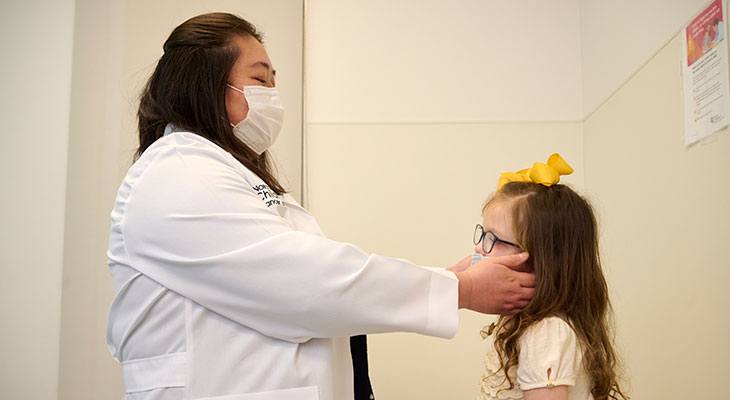 Lymphoma is a cancer of the lymphatic system, which is part of the body’s immune system that helps fight infections and other diseases. Non-Hodgkin lymphoma causes white blood cells called lymphocytes to grow out of control, which can spread to other tissues and organs and cause tumors to form.

Non-Hodgkin lymphoma can begin in any part of the lymph system, which involves various tissues and lymph nodes.

There is no known cause of non-Hodgkin lymphoma in children, and while it can occur at any age, it is most common in younger children and is two to three times more frequent in boys than girls.

Physicians who are also researchers mean children with non-Hodgkin lymphoma benefit from the latest treatments from experienced oncologists and hematologists.

Talk to a member of our team about advanced care.

Factors that increase the risk for non-Hodgkin lymphoma include:

Kids who have undergone chemotherapy or radiation treatments for other cancers can have a higher risk of developing lymphoma later in life. Regular checkups with a pediatrician or oncologist can help detect early symptoms.

Non-Hodgkin lymphoma can show a variety of symptoms in children, most notably swollen, enlarged lymph nodes that can appear in the neck, chest or groin. Parents also may notice fatigue, fever, night sweats or weight loss with their child.

“A lot of these symptoms for leukemia and lymphoma can be vague and nonspecific,” said Jun Zhao, D.O., a pediatric hematologist/oncologist with Norton Children’s Cancer Institute, affiliated with the UofL School of Medicine. “But if these symptoms don’t go away, I would recommend having your child evaluated by a medical professional.”