New start with a new heart

New start with a new heart 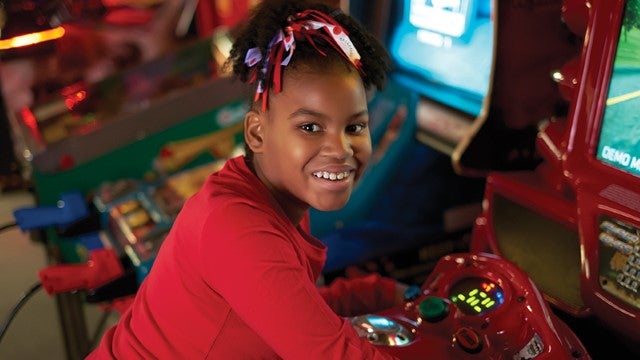 At age 8, Scharnese Cook was very active. She ran track at school and was involved in various activities. In May 2015, she began to have trouble breathing. At first, it appeared to be a severe asthma attack. The situation became critical when emergency medical personnel found that her pulse was much too rapid. A chest X-ray revealed that Scharnese had an enlarged heart.

“As a former director of a youth center, I had seen children who had enlarged hearts and didn’t know it,” said Scharnese’s mother, Shilese Stover. “I knew this was something we needed to get looked at right away.”

Tests at the Norton Children’s Hospital emergency department revealed Scharnese had congestive heart failure. She was diagnosed with dilated cardiomyopathy, which meant her heart chambers were enlarged and her heart was pumping only one-fourth the normal amount of blood.

“I didn’t believe it,” Stover said. “There was no way a child I knew to be healthy could be in heart failure. She had just run a track meet and I was around her every day!”

Heart failure is a term used to describe an inability of the heart to pump blood properly.

“Heart failure can occur in people of all ages,” said Joshua Sparks, M.D., medical director for the advanced heart failure program at the Norton Children’s Hospital Heart Center and pediatric cardiologist with University of Louisville Physicians. “It’s not uncommon for earlier signs of heart failure in children to mimic other conditions such as asthma, reflux or even viral illness.

“At least half of children with heart failure are diagnosed when it is fairly advanced.”

Heart failure can be due to congenital heart disease, infections or inherited or metabolic conditions. In around half of all cases, including Scharnese’s, there is no apparent cause.

Scharnese was admitted to Norton Children’s Hospital’s “Just for Kids” Critical Care Center, where she was put on medication to control her symptoms. The medication worked initially.

“A week after being in the hospital, Scharnese passed out but then woke right up,” Stover said. “She didn’t understand why everyone was around her bed fussing, and she actually started reassuring me that she’d be fine. But then she passed out again and didn’t wake up.”

“Over time, the medication became less effective, as is often the case,” Dr. Sparks said. “The passing out was actually her heart stopping.”

Due to her progressive decline and the decreasing effectiveness of the medication, Scharnese was put on the heart transplant list.

“Scharnese and I were playing a game and the next thing I knew I was signing paperwork for the heart transplant list,” Stover said.

Soon after, Scharnese received a ventricular assist device (VAD), a special pump that is surgically inserted into the heart. When connected to an external power source, the VAD removes blood from the left side of the heart and pumps it to the body. The VAD also allowed Scharnese to move around, eat and get stronger while waiting for a donor heart.

“We estimate that around 300 children in Kentucky suffer from heart failure each year,” Dr. Sparks said. “The majority can be treated with medication alone but some require surgery. A small percentage require advanced therapies such as VADs and heart transplants. At the Norton Children’s Hospital Heart Center, we can address any need a child has.”

“While we hope that medication alone will control heart failure, we have options such as the VADs and heart transplantation.” Scharnese had her VAD about four weeks before the family received notice that a donor heart was on the way. Specialists at Norton Children’s Hospital and UofL Physicians performed a heart transplant on June 26. Just two weeks later, Scharnese was home from the hospital — only eight weeks after the ordeal began.

“Things are now looking up, but we have learned we have to do things differently, and worry in new ways,” Stover said. “Before, a headache would have meant getting a Tylenol. Now it could be the start of the flu, a sign of rejection, a sign of pneumonia or a sign of blood pressure changes. Something small for others is something major to us.”

In some cases, Scharnese and others like her may resume their lifestyle following heart transplant surgery.

“Patients who have had heart transplants can play sports, go to school and church, and essentially do everything they want with very few limitations,” Dr. Sparks said. “But it’s important to know the transplant is not a cure. There are still daily medications plus procedures and testing.”

For Scharnese, now age 9, life is about finding a new normal. She is learning to cope with different medications as her body gets used to the new heart and with the ongoing worry and emotions that come with uncertainty about the future.

“On the whole, Scharnese is doing great,” Stover said. “She’s taking singing lessons, doing solos at church and she’s back at school with her friends.

“It’s really crazy to me that she went through so much in such a short time span.”

Children with heart conditions who seek care at Norton Children’s Hospital will receive a boost thanks to a $2 million gift from the Lawrence Family Foundation.

The Jennifer Lawrence Cardiac Intensive Care Unit will feature private rooms dedicated to children recovering from heart procedures, open heart surgery including heart transplant, heart failure and other medical conditions requiring intensive care. The unit also will offer space for families to stay with their children. It will be staffed by additional specialists with cardiac critical care training and experience, dedicated nursing staff and other professionals focused solely on heart care. Research has shown that a unit of this nature can improve a child’s recovery.

Additionally, the Lawrence Family Foundation is challenging our community to raise an additional $2 million for the unit.