What if your ‘likes’ were worth $1 each?

What if your ‘likes’ were worth $1 each?

Could they cure cancer? Maybe. Help us try on Facebook! 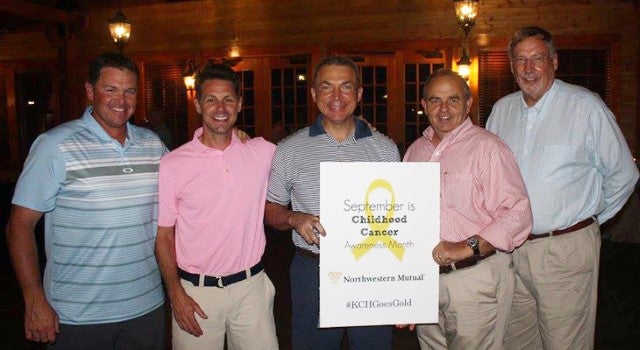 Every day in the United States, 43 families find out their child has cancer. Not only does cancer threaten an innocent child’s life, it deeply affects the entire family. In an instant the lives of that child, their siblings, parents, grandparents, friends, classmates and anyone who is close to the family are forever changed. So those 43 lives actually are multiplied into thousands.

Our children’s hospital is teaming up with Northwestern Mutual to give a voice to anyone and everyone who has been affected by childhood cancer. September is Childhood Cancer Awareness Month and the goal is simple: We want to create a voice via today’s most powerful grassroots method — social media.

The campaign gives everyone a chance to join a movement that is bigger than just one month or just one person. We’re inviting everyone to “Go Gold” with us.

The “Go Gold” initiative is simple and takes just a few minutes for you to make a difference, and Northwestern Mutual’s Louisville division has agreed to put its time and resources toward the cause. Here’s what you can do:

• Take a photo of you or your family in gold or yellow accessories. Share your photo with us using #KCHGoesGold.

“Our team is excited to donate dollars to help the cause but also play an active role in spreading the word,” said J. Daniel Rivers, managing partner, Northwestern Mutual. “We all dream about a future where children and families can move beyond the fears of cancer and find happiness. Every child deserves a chance just to be a kid.”

Since 2012, Northwestern Mutual employees and financial representatives have spearheaded fundraising events nationwide, including lemonade stands, golf outings and run/walk events, to raise awareness and funds for childhood cancer research and support working with nonprofit partners. To date, Northwestern Mutual has given nearly $500,000  to support pediatric cancer care at our own children’s hospital.

“There wasn’t a moment of hesitation about joining forces with Norton Children’s Hospital when we heard about the ‘Go Gold with us’ initiative,” Rivers said. “Our children’s hospital here in Louisville are on the front lines providing care to hundreds of children each year who battle cancer. We think this initiative has a real chance to make a difference, and we are thrilled to be their corporate partner to help spread the word.”