While Kinley Elrod fights her own health issues, she hopes to help other children fighting 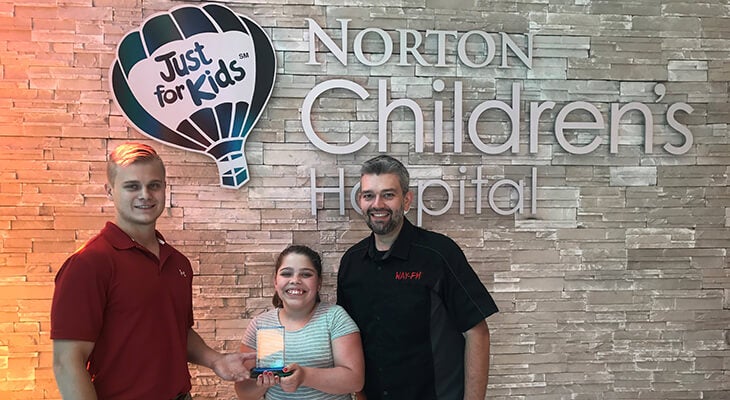 I have homes, I have many homes.

One of my many homes is Norton Children’s Hospital.

Some people may think it’s silly

To call a hospital a home,

But to me, that’s what I’ve known.

Kinley has written several poems about her time at Norton Children’s Hospital. But this one really gets at how much time she’s spent there and how she’s tried to adjust.

A couple of months into her life, doctors diagnosed Kinley with panhypopituitarism and adrenal insufficiency. Because Kinley’s pituitary and adrenal glands don’t work properly, she risks becoming seriously ill from even a .

“She has gone septic from an ear infection, from a urinary tract infection,” said her mother, Danielle Barley. “Any small thing that you can take for granted with a normal kid, you have to rush her to a hospital.”

Kinley has spent many nights at Norton Children’s Hospital. “Whenever you are here, you really want to go home,” Kinley said. “You don’t want to be in that bed all day.”

That’s why she made it her mission to raise money for a playroom. She wanted other kids like her to have a place to take their minds off why they’re in the hospital.

“I know what the kids feel like and it is not very nice,” Kinley said. “A toy can just make your day and make everything better.”

Tens of thousands of dollars later, “Kinley’s Playroom” came to fruition. “It was really big,” Kinley said proudly with a big grin.

Her drive and compassionate heart got the attention of local radio station WAY-FM. The station named Kinley a Kentuckiana Difference Maker, a recognition the station awards to people who’ve made an extraordinary impact in the community.

“Her story was very compelling — a young person who is achieving something adults may not even do,” said Michael Russell, operations director, WAY-FM. “Her selflessness is really what stood out and just how she has taken that goal and made a huge impact for a young person.”

“I don’t give back to my community for recognition,” said Kinley. “I do it because I know how the kids feel and it just makes me happy whenever I see them happy with a toy.”