Finding the gift in every person

Finding the gift in every person 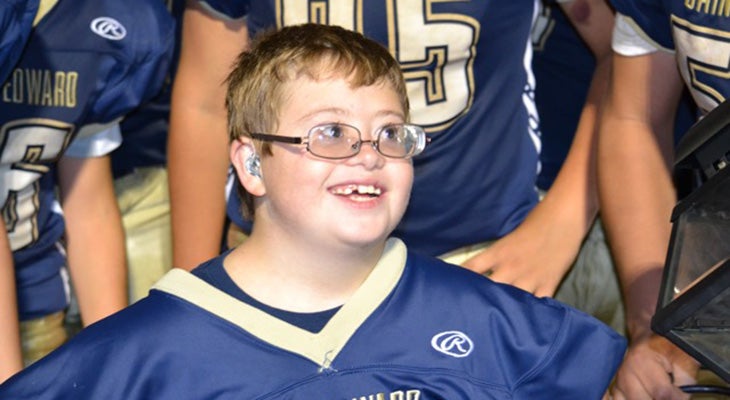 In March 2004 when our son, Kendall, was born, my husband and I were flooded with emotions — the overwhelming joy of becoming parents, followed by total shock when we were told Kendall has Down syndrome.

While we were thrilled with our baby boy being born, we also felt like we were grieving the loss of the child we “thought” we were going to have.  Once we were able to wrap our minds around what was happening, we knew that we were blessed with an incredible gift.

It was at that moment we realized we had a job to do: Not only to love, encourage, teach and raise our son, but to educate others about his disability and show them that he truly is a blessing.

If you don’t know what Down syndrome is, it’s a condition in which a child is born with an extra chromosome. This extra genetic material causes varying degrees of mental and physical delays in the child.

Kendall is quite the charmer. He also is your typical boy. He loves playing video games and sports, helping his dad fix things and being included in whatever the family is doing.

In 2013, his younger sister began running cross country at her Catholic school. Since we are members of the parish, we were presented with the option for Kendall to run on the team. As much as the boy loves to run, we thought we’d give it a try. I was a little hesitant at first, wondering how the kids at our daughter’s school would react to him.

What we experienced was something pretty awesome. The team and community welcomed Kendall with open arms. During meets, the kids who finished ahead of Kendall would circle back to find him. They all encouraged him to keep going, sometimes even chanting his name, and helped him cross the finish line. What a true sense of sportsmanship! The kids have come to know Kendall, love him and, most important, accept him.

Unfortunately not all of Kendall’s experiences have been as positive. Recently at a cross country meet, Kendall and I were standing under our team’s tent. Another school’s tent was adjacent to ours, and there were a few boys about Kendall’s age standing under it.

Kendall approached them and said, “Hi, what’s your name?” Two of the boys walked away, and one stood there and looked at Kendall like he was speaking a foreign language. Assuming the boy did not hear him, Kendall asked the question again. The boy continued to just look at him, then finally turned away and started talking to his buddies.

Kendall was bothered by this and couldn’t understand why the boy wouldn’t answer him. Honestly, I couldn’t understand it either. I did my best to explain that not all people are nice and quickly diverted Kendall’s attention elsewhere. Are we not teaching our children well enough that every person, no matter what they look like or how they act, has feelings too?

As any parent can attest, in my experiences over the 12 years of Kendall’s life, I have learned so much. I’ve learned that not everything works out as planned, but you have to roll with the punches. I’ve learned that you need lots of patience where kids are concerned. (This one I’m still learning!) But, above all, I’ve learned that we need to be accepting of all individuals.

As we celebrate Down Syndrome Awareness Month, we should be mindful that everyone has been put on this Earth for a reason. Deep down, everyone is the same no matter the color of their skin, whether they are rich or poor, or whether their minds and bodies work the same as others. Our common denominator is we all have feelings. No one feels good when made fun of, excluded from things or looked at as if you are from another planet.

I believe that teaching our children to be accepting of others who are “different” is just as important as teaching them to read and write. Every person has a gift to share, if we take the time to discover it. If this lesson starts at home when children are young, think of the impact it can have on our community and our world in years to come.