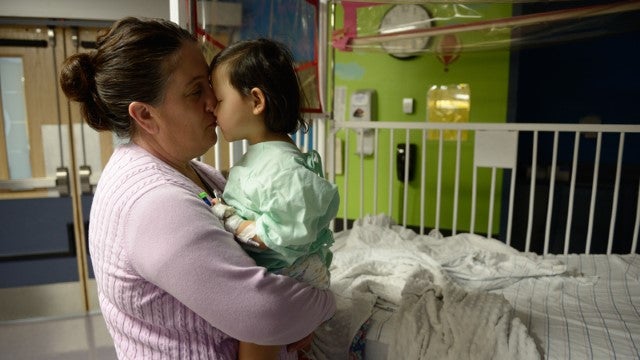 *Note: Ava Delaney is currently experiencing some medical issues due to her heterotaxy. However, her family wishes to share her story to express their gratitude to the hospital and let others know about the Heart Center.

Two-year-old Ava is one lucky little girl. Born in China with rare life-threatening heart and organ defects, she was placed in an orphanage. In hopes of finding a home for Ava, her profile was placed on an adoption website for children who had been passed over due to extremely complicated health issues.

Little did Ava know that waiting in the wings was the Delaney family in Hardyville, Kentucky. They had been looking to adopt a special-focus child and were waiting for an agency to find a good match. That’s when Catherine Delaney came across Ava’s profile.

“I felt like she was the one and my husband agreed that she needed a family, no matter for how long,” Catherine said. “We were going to be her family.”

The family was advised not to adopt her, but nothing would deter them — they knew she was the one for them.

Once Ava arrived in Kentucky, they went to work visiting doctors to find out just how serious Ava’s condition was, and how they would give her the best chance. Ava was sent to Norton Children’s Hospital, where the family was connected with the team in the Heart Center.

“Ava had multiple problems, the first being severe heterotaxy, which meant many of her organs were not on the correct side of the body,” said Frank A. Pigula, M.D., chief of cardiovascular surgery and co-director of the Heart Center. “She also had several heart defects that affected the body’s circulation and oxygenation, including not having a correctly developed pulmonary valve and artery.”

“They told me they were going to have to do four heart surgeries in one,” Catherine said.

A cardiac catheterization performed by Edward Kim, M.D., helped set the course for the complicated surgery, and the Heart Center team began planning.

On April 27, 2016, the complicated eight-hour surgery began. Dr. Pigula, who is also with University of Louisville Physicians, essentially redirected and repaired the circulation in Ava’s heart and created a new pulmonary valve and artery.

Likely the longest eight hours of the Delaney family’s lives, the operation was an emotional rollercoaster for the surgical team as well.

“After the surgery, Dr. Pigula came to the waiting room and sat down — he looked like he had been through the wringer,” Catherine said. “He said it went well and I just started to cry. What this man did was amazing. He worked so hard on our little girl.”

Dr. Pigula was able to repair Ava’s circulation so that she would not have any complications with her heart. She has a pacemaker and may need a future valve procedure, but her heart is healthy.

“I’m thankful that we have this hospital here, and I’m amazed at everything that was done for our daughter — I feel like they are family,” Catherine said. “I had been praying that God would open up and tell us where we needed to take her. I’m thankful we didn’t go elsewhere.”

For everything Ava has been through, her mother calls her a fighter.