Molly Knott would need two surgeries — one to remove a mass in her armpit, and a second to reconstruct her blood vessels to prevent the arteriovenous malformation (AVM) from returning.

When Molly Knott was 2, the toddler took a spill in the kitchen and her mother reflexively scooped her up, grasping her under her arms.

That’s when she first noticed a lump under Molly’s left armpit. Molly said it hurt. A bug bite probably, right? As it got a little bigger, it still wasn’t clear what it was and whether it should be a concern.

After a couple weeks the lump was larger, now the size of a golf ball. They returned to Molly’s pediatrician near their home in Owensboro, Kentucky, and the look on the pediatrician’s face revealed this wasn’t a bug bite.

“We went back to the pediatrician that Friday and we knew from his facial expression and hesitation that something might be off,” said Molly’s mother, Nikki. “He suggested next steps with a referral to Norton Children’s for further evaluation. We went into the weekend assuming the worst, possibly cancer.”

Getting to know Molly’s family

Medical professionals at Norton Children’s Neuroscience Institute, affiliated with the UofL School of Medicine, wanted to schedule an appointment urgently. On that Saturday, Nikki received a call to bring Molly in two days later, on Monday.

The rapid response and the understanding that Molly would get sophisticated care quickly helped calm Nikki’s nerves.

“They moved quickly to care for Molly,” Nikki said. “The extra time taken to interact and get to know our family on our first interaction and visit with Norton Children’s meant so much to our family. It really lightened a stressful situation.” 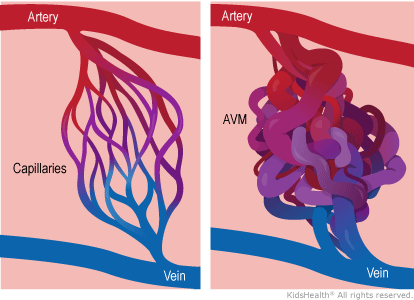 Molly was admitted that same day for surgery to remove the mass. Directly after surgery, doctors at Norton Children’s diagnosed Molly with an arteriovenous malformation (AVM).

An AVM is an abnormal connection between an artery (a blood vessel carrying blood from the heart out to the body) and a vein (a vessel returning blood to the heart). An AVM can be anywhere in the body, but are most often in the brain or spine.

The short-circuit between the artery and the vein — skipping tiny capillaries — causes blood to pump at high pressure into the veins. It also means that the capillaries don’t have an opportunity to distribute as much oxygen and nutrient-rich blood where it’s needed.

“Treatment for an AVM depends on its location, size and the symptoms it causes,” said Elizabeth S. Doll, M.D, child neurologist with Norton Children’s Neuroscience Institute. “A small AVM may never need treatment, but it could change. Some bigger AVMs require surgery or other treatment.”

Families from around the country, around the world, across Kentucky and the Louisville area choose the skilled and caring providers of Norton Children’s Neuroscience Institute.
Connect with the neurosurgery team.

Matching surgical caps for Molly and her dearest doll

Molly brought along her special baby doll from home. Both of them were rolled into surgery together with matching surgery caps.

Without surgery, the blood vessels would continue to grow together, forming large masses and creating deformities in her limbs.

“Everything moved so quickly, said Nikki. “From morning to night, the care we received was amazing. We could not have asked for anything better. We appreciated the daily visits from volunteer services that would talk with Molly and pass along coloring books, crayons, stuffed animals, etc. … Each step was made easier thanks to the compassionate and professional team.”

While Nikki was pleased with the care, anytime Molly talks about her stay at Norton Children’s Hospital, she mentions the popsicles.

“The colorful and tasty popsicles made a lasting impression as her favorite memory in the hospital,” Nikki said.

This past January, Molly and her family made another trip to Louisville to examine a small lump on her hip. Molly, now 5, won’t need another operation and doesn’t need to be evaluated again until she’s 16. That’s a source of hope and confidence for her parents.

“It’s always great to celebrate milestones of my patients, including Molly’s next steps into kindergarten,” Dr. Doll said.

The grateful Knotts wanted to give back to the not-for-profit hospital. Nikki, a teacher at Burns Elementary in Owensboro, teamed up with her colleagues and students to host a Trike-a-thon in conjunction with the 2019 Champions for Kids event to benefit Norton Children’s Hospital. They raised a combined $7,000 for the “Just for Kids” Critical Care Center, the pediatric intensive care unit at Norton Children’s Hospital where Molly recovered after her surgeries. You too can donate.

“Many of our students have been impacted by Norton Children’s,” Nikki said. “The success of the event is a testament to how Norton Children’s has benefitted the kids in our community. It will forever have a place in our hearts.”

Symptoms can vary among children, but some of the common signs of an AVM include: