School, friends and family support Aiden and his mission 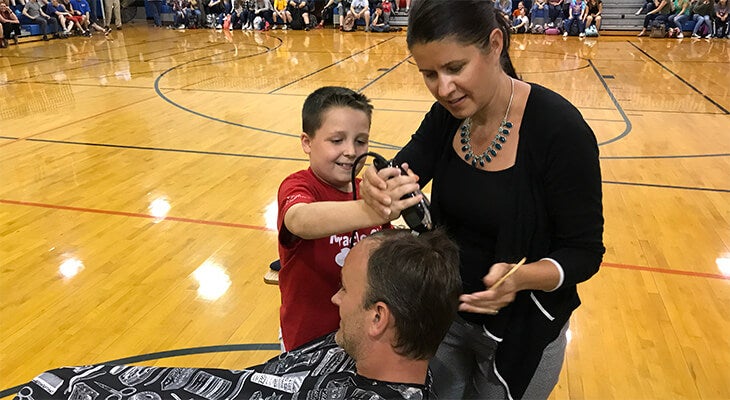 His smile brightened the stage as honorary chair of this year’s Chili’s® Clip for Kids on May 21. His mom, Gena, and his dad, Jason, were center stage to help honor their son, a two-time cancer survivor and mentor to other kids fighting the disease.

“Aiden is an inspiration,” said Michelle Lena, Chili’s Clip for Kids co-chair. “Our committee was just elated to have the opportunity to recognize him at this year’s event.”

Aiden has been raising money through Aiden’s Legacy for more than four years. He has a goal of raising $250,000 to donate to the Addison Jo Blair Cancer Care Center at Norton Children’s Hospital. To support him, many of his classmates, teachers and staff members at Silver Creek middle and elementary schools in Sellersburg, Indiana, have made contributions in many ways. Most recently, the middle school, where Aiden is in the sixth grade, hosted a community clip event. The students collected more than $1,000, and in exchange the assistant principal, varsity basketball coach and one of his teachers all shaved their heads.

If you would like to support Aiden’s Legacy and Chili’s Clip for Kids, there’s still time!

or call the Children’s Hospital Foundation

Gena decided to shave her head for a third time. With shoulder-length hair, some might wonder why.

“These kids, including my son, fight so hard during their cancer journey. My hair is insignificant in comparison to what they endure,” she said.

Aiden’s team had a few donations of $800 or more. Most are from friends and family members giving what they can.

“It really is true that every dollar, every cent, every donation helps,” Gena said. “Aiden, Jason and I are just so appreciative of the donations, support and words of encouragement we received not only during Clip for Kids, but year round.”