When Par Tha Sung had a routine ultrasound during her pregnancy, she found out that her unborn child had four congenital heart defects. 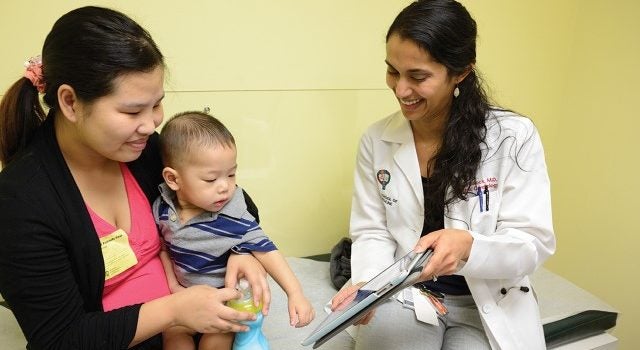 When Par Tha Sung had a routine ultrasound during her pregnancy, she found out that her unborn child had four congenital heart defects. “I was very sad and just cried,” said the Owensboro, Ky., resident, who is originally from Myanmar.

“I had never heard of heart surgery. I was very worried about my son and didn’t think he would survive.”

Once he was born, little Roland Lian Cung Bawi was kept under the watchful eye of University of Louisville cardiologists at Norton Children’s Hospital, who determined he was too small and fragile at the time to undergo major heart surgery.

“Two of the defects — double outlet right ventricle and malposition of the great arteries — were considered complex and would require surgery,” said Smitha Bullock, M.D., a University of Louisville pediatric cardiologist who practices at Norton Children’s Hospital. “Left untreated, the conditions would lead to progressive heart failure.”

Finally, at 14 months old, Roland was big and strong enough to have surgery. With one hurdle behind them, doctors now had the challenge of determining how best to fix Roland’s heart defects. While each defect was repairable in itself, it is unusual to have four to contend with together.

As a solution, doctors with Norton Children’s Hospital and the University of Louisville School of Medicine turned to engineers at the J.B. Speed School of Engineering at the University of Louisville to print a 3-D model of Roland’s heart so that they could study the heart and prepare a plan prior to surgery day. This is the first time 3-D printing has been used in Kentucky to plan a heart surgery.

“We can use imaging techniques to create different views of the heart, but in this case we really wanted to create something that would help the surgical team better plan the procedure,” said Philip B. Dydynski, M.D., chief of radiology at Norton Children’s Hospital. “This required a different thought process and so we looked to the J.B. Speed School of Engineering.”

What resulted was a three-dimensional model that was twice the size of Roland’s heart. “Once the CT angiogram was converted into the correct format, we were able to use an inexpensive 3-D printer to create the heart,” said Tim Gornet, manager of operations at the Rapid Prototyping Center at U of L’s J.B. Speed School of Engineering. “The model was built in three separate parts to allow the surgeon to open up the model and see inside.”

“When you’re house hunting, you don’t want to just look in the windows,” said Erle H. Austin, M.D., a University of Louisville cardiothoracic surgeon and chief of cardiothoracic surgery at Norton Children’s Hospital. “You want to be able to go inside. That’s essentially what the model allowed us to do.”

On a heart the size of a lime, such precision makes a big difference. “Once I had the model, I knew exactly what I would be able to do,” Dr. Austin said. “This meant fewer incisions in the heart, less operating time and an easier postoperative recovery.”

Roland’s surgery was performed on Feb. 10. It took approximately two hours for Dr. Austin and his team to make a complete repair. Roland was discharged from the hospital just four days later. The majority of the 3-D printing done at U of L’s Rapid Prototyping Center is for the manufacturing industry, so working on this project had special meaning.

“Knowing that what we were doing could help save a child’s life made this project much more special,” Gornet said. “This is exciting technology that hopefully has potential to improve care in other specialty areas at Norton Children’s Hospital as well,” Dr. Dydynski said.

For Roland, the procedure has meant better sleep, improved appetite and a happier demeanor, according to his mother. For Dr. Austin, it’s a step in a new direction for complex surgeries. “I foresee the use of 3-D printing for surgeries getting better and better over time,” he said.