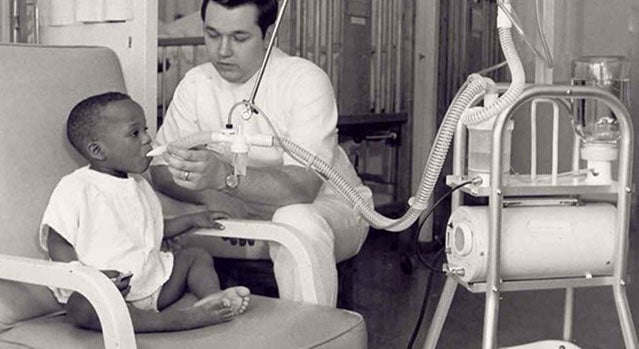 On March 27, 1890, the most destructive tornado in Kentucky’s history tore through downtown Louisville, causing widespread destruction and leaving hundreds dead and injured. Among the casualties were some of Louisville’s tiniest residents — its children. At the time, there was no central place within the city where these children could receive specialized care.

In the wake of the devastation, the community wanted to make sure that caring for our sickest kids would never be a problem again.

On Jan. 23, 1892, Children’s Free Hospital began serving children in the Louisville community. Not only was it the 10th children’s hospital in the country, it was a place where children could have safe surgery and a clean place to recover. With its faith-based founding, the staff treated all children who needed medical care while also working to improve the health conditions outside of the hospital.

125 years later, Norton Children’s Hospital carries on that legacy of providing lifesaving care for kids and supporting families throughout the region regardless of their ability to pay. From being the country’s second hospital to perform a successful infant heart transplant to launching the first programs for neonatal massage to pioneering treatment for scoliosis, Norton Children’s serves more than 170,000 children a year.

It takes many stories — including yours — to build such a legacy. From patients and their families to doctors, nurses, donors and employees, everyone has played a significant part in making Norton Children’s what it is today.

We want to capture and share these memories throughout the year — to tell the real story about the passion, love and miracles that have made Norton Children’s the place it is today.

We’d be honored to celebrate you. Click here to tell us your story. By completing the form you’ll be entered to win a chance for two to ride in the Norton Children’s Hospital hot air balloon. See rules here.