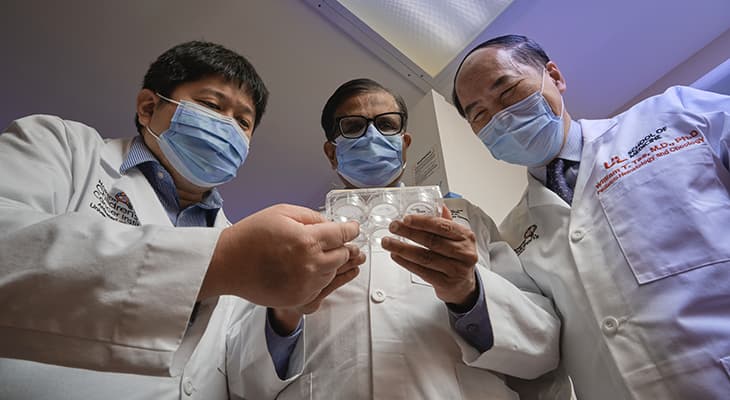 “The team at Norton Children’s Cancer Institute and the University of Louisville have some very innovative research that has the chance of developing into even more life-changing treatments for children with cancer,” Dunbar said. “I am happy to support these projects to give patients from our region access to these potentially life-saving treatments.”

Dunbar’s son, Evan, died from neuroblastoma in 2001 at age 6, and his father died from melanoma in 2009, both of whom have served as catalysts for Dunbar’s donations. His wife, Stephanie Altobellis, M.D., diagnosed Dunbar’s own cancer in 2019. In 2020, he provided funding for a research nurse who will be instrumental in making these upcoming trials a reality.

Once considered virtually incurable, some pediatric cancers now have a survival rate of about 85%, thanks to research that has led to new treatments.

Dr. Tse’s project will look at using universal CAR-T cells, or chimeric antigen receptor T cells, to treat high-risk malignancies, including neuroblastoma, osteosarcoma and malignant brain tumors. CAR-T cell immunotherapy is a revolutionary treatment in which genetically reprogrammed immune cells are infused into the patient. The patient’s reprogrammed immune system then will recognize and kill leukemia cells that have resisted conventional chemotherapy. Normally, CAR-T uses a patient’s own cells that are specifically reprogrammed — an expensive option that often is a barrier to treatment. This trial will develop a new generation of CAR-T cells that will hopefully serve as a universal, ready-made therapeutic product.

This clinical research builds on Dunbar’s foundational gift to establish a research-based CAR-T lab at the University of Louisville’s Brown Cancer Center in Evan’s and Dr. Altobellis’ names. Having the actual T cell collection and infusion process occur in Louisville, when the research goals match up, allows local patients and their T cells to stay in Louisville.

Dr. Huang’s project involves radioimmunotherapy to target brain tumors by delivering radiation directly to the site of the tumor, thereby reducing the total amount of radiation exposure to the rest of the brain. This method already has shown early promise in malignant childhood tumors that arise from or have spread to the brain. This project will incorporate a dual targeted approach (bifunctional radioimmunotherapy, or BRIT) by simultaneously counteracting the tumor’s ability to evade the immune system.

“These two projects have the potential to bring innovative treatments to children with cancer,” said Ashok B. Raj, M.D., pediatric hematologist/oncologist with Norton Children’s Cancer Institute and chief of the division of pediatric hematology/oncology and stem cell transplantation at the University of Louisville School of Medicine. “We are so grateful to Tom for his support.”

This gift is part of a $20 million vision for Norton Children’s Cancer Institute, which includes establishing new initiatives in cellular immunotherapy and precision medicine, helping attract more highly trained clinician scientists to the community, and bringing new and transformative treatments to children with cancer.

“Tom’s support has been vital to children in our community,” said Lynnie Meyer, Ed.D., R.N., CFRE, senior vice president and chief development officer, Norton Healthcare. “We would love to see a world without childhood cancer, which requires support from the entire community.”

Dunbar also established the annual Evan Dunbar Lectureship series, which was originally created for caregivers and medical professionals with an interest in current pediatric oncology research. For the first time in its history, this year’s lectureship welcomed members of the community who share an interest in current pediatric oncology research. The speaker was well-known chair of the Children’s Oncology Group, Douglas S. Hawkins, M.D., Center for Clinical and Translational Research at Seattle Children’s Hospital and professor of pediatrics, hematology/oncology division, University of Washington School of Medicine, Seattle. Dr. Hawkins discussed successes and challenges in pediatric cancer from the Children’s Oncology Group perspective.