Intussusception (in-tuh-suh-SEP-shun) happens when one part of the bowel slides into the next, much like the pieces of a telescope.

When this "telescoping" happens:

Intussusception is a medical emergency that needs care right away. It's the most common abdominal emergency in children under 2 years old. 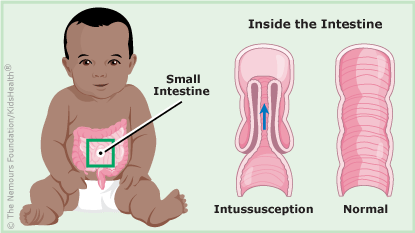 What Are the Signs & Symptoms of Intussusception?

Babies and children with intussusception have intense belly pain that:

As the pain eases, the child may stop crying for a while and seem to feel better. The pain usually comes and goes like this, but can be very strong when it returns.

Symptoms also can include:

As the illness continues, the child may:

Most of the time, doctors don't know what causes intussusception. In some cases, it might follow a recent attack of gastroenteritis (or "stomach flu"). It also can follow a cold or the flu. Bacterial or viral gastrointestinal infections can make the infection-fighting lymph tissue that lines the intestine swell. This can cause part of the intestine to get pulled into the other.

In kids younger than 3 months old or older than 5, intussusception is more likely to be caused by an underlying condition like enlarged lymph nodes, a tumor, or a blood vessel problem in the intestines.

Intussusception is most common in babies 5 to 9 months old, but older children also can have it. Boys get intussusception more often than girls.

How Is Intussusception Diagnosed?

Doctors usually check for intussusception if a child keeps having periods of pain, drawing up the legs, vomiting, feeling drowsy, or poop with blood and mucus.

During the visit, the doctor will:

How Is Intussusception Treated?

If the doctor suspects intussusception, the child may be sent to an emergency room (ER). Usually, doctors there will ask a pediatric surgeon to see the child right away. The ER doctor might order an abdominal ultrasound or X-ray, which can sometimes show a blockage in the intestines. If the child looks very sick, suggesting damage to the intestine, the surgeon may take the child to the operating room right away to fix the blocked bowel.

Two kinds of enemas often can diagnose and treat intussusception at the same time:

Both types of enema are very safe, and children usually do very well. Most children treated with the enema do not need surgery. In a few children, intussusception can return, usually within 72 hours of the procedure. They may need a repeat enema.

A child will need surgery if the intestine is torn, an enema doesn't work, or the child is too sick for an enema. This is often the case in older children. Then, surgeons will try to fix the obstruction. But if too much damage has been done, they may need to remove that part of the bowel.

After treatment, the child will stay in the hospital and get IV feedings until they can eat and have normal bowel function. Doctors will watch the child to make sure that the intussusception does not come back. Some babies also may get antibiotics to prevent infection.

When Should I Call the Doctor?

Intussusception is a medical emergency. Call your doctor or get emergency medical help right away if your child has any symptoms of intussusception, such as:

Most infants treated within the first 24 hours recover completely with no problems. But untreated intussusception can cause serious problems that get worse quickly. So it's important to get help right away — every second counts.

Medical Care and Your Newborn

By the time you hold your new baby for the first time, you've probably chosen your little one's doctor. Learn about your newborn's medical care.

The digestive process starts even before the first bite of food. Find out more about the digestive system and how our bodies break down and absorb the food we eat.

A Guide for First-Time Parents

If you're a first-time parent, put your fears aside and get the basics in this guide about burping, bathing, bonding, and other baby-care concerns.