Hearing loss is a common problem in newborns. Some cases are due to auditory neuropathy spectrum disorder (ANSD), a problem in the transmission of sound from the ear's innermost part (the inner ear) to the brain.

The causes of ANSD are unknown, but children who are born prematurely or have a family history of the condition are at higher risk for it. Symptoms can develop at any age, but most kids with ANSD are born with it and diagnosed in the first months of life.

As ANSD becomes better understood, it is diagnosed more frequently and now accounts for about 10% to 15% of cases of hearing loss.

Fortunately, kids with ANSD can develop strong language and communication skills with the help of medical devices, therapy, and visual communication techniques. Proper diagnosis and early intervention are essential, so if you suspect that your child has any difficulty hearing, talk with your doctor as soon as possible.

To understand ANSD, it's helpful to review how the ear hears. Hearing begins when sound waves that travel through the air reach the outer ear, or pinna, the part of the ear that's visible. The sound waves go through the ear canal into the middle ear, which includes the eardrum (a thin layer of tissue) and three tiny bones called ossicles. The sound causes the eardrum to vibrate. The ossicles amplify these vibrations and carry them to the inner ear.

The inner ear is made up of a snail-shaped chamber called the cochlea, which is filled with fluid and lined with four rows of tiny hair cells. When the vibrations move through this fluid, the outer hair cells contract back and forth and amplify the sound. When the vibrations are big enough, the inner hair cells translate them into electrical nerve impulses in the auditory nerve, which connects the inner ear to the brain. When the nerve impulses reach the brain, they are interpreted as sound. 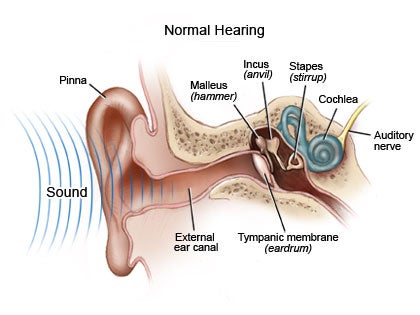 As a result, the sound that arrives at the brain isn't organized in a way that the brain can understand. It is disorganized and in some cases the sound never even makes it to the brain. In other cases, ANSD is due to a problem with the auditory nerve.

ANSD has only been understood and diagnosed in recent years. As a result, many questions remain about it. Not all newborn hearing screening programs can identify ANSD, so many kids and adults might have it but not know it.

For some people, ANSD improves over time. For others, it remains the same or gets worse.

The causes of ANSD aren't known. But some factors do put a child at risk, including:

Even if a child passes a newborn hearing screening, symptoms of hearing problems might only be noticed over time. Talk with your doctor if you think that your child is having trouble hearing or if you notice any of these symptoms:

If hearing problems seem likely, your doctor might refer you to an audiologist (someone who specializes in diagnosing and treating hearing loss and balance problems). Your doctor also might have your child see an otolaryngologist (also called an ears, nose, and throat [ENT] doctor).

A series of tests can help diagnose ANSD and rule out other hearing problems. Many of these are part of routine hearing screenings given to newborns. They're also used to diagnose the condition in older kids.

The tests won't cause pain or discomfort and in most cases do not require a hospital stay.

Middle ear muscle reflex (MEMR): The MEMR tests how well the ear responds to loud sounds. In a healthy ear, loud sounds trigger a reflex and cause the muscles in the middle ear to contract. In a child with ANSD, loud sounds don't trigger the reflex or much louder sounds are needed to trigger it.

For the MEMR (also called an acoustic reflex test), a soft rubber tip is placed in the ear canal. A series of loud sounds are sent through the tips into the ears and a machine records whether the sound has triggered a reflex. Sometimes the test is done while the child is sleeping.

Otoacoustic emission (OAE): This test measures how well the outer hair cells in the cochlea function. It's done when the child is lying still or asleep, either naturally or through mild sedation. A tiny probe that contains a special microphone is placed in the ear canal, pulsing sounds are sent through it, and a machine measures what kind of echo the sound causes in the outer hair cells.

Auditory brainstem response (ABR): This test measures whether the auditory nerve transmits sound from the inner ear to the lower part of the brain and how loud sounds have to be for the brain to detect them. If the brain is not receiving the information in a clear way, this test can show that. During the ABR the child is asleep, either naturally or through sedation. The audiologist places tiny earphones in the ear and sends sounds through them while electrodes (which look like tiny stickers) placed on the child's head measure brain activity.

If these tests show that a child has ANSD, additional testing will be needed. In kids older than 1, these tests can determine the severity of the hearing problem. They include:

While there is no known cure for ANSD, assistive listening devices (ALDs) can help kids with ANSD make sense of sounds and develop language skills. You'll work with a medical team to determine which devices are right for your child. Treatment for ANSD depends on how severe it is and the child's age at diagnosis.

An important part of making any device effective is ongoing therapy with a speech-language pathologist, who help kids with hearing loss develop speaking and hearing skills.

Frequency modulation (FM) system: An FM system helps reduce background noise and makes a speaker's voice louder so the child can understand it. The speaker wears a tiny microphone and a transmitter, which sends an electrical signal to a wireless receiver that the child wears either on the ear or elsewhere on the body. It's portable and can be helpful in classroom settings.

Hearing aid: A hearing aid amplifies sounds coming into the ear. Often it can help when the outer hair cells don't work as they should and can't amplify sound. In some cases of ANSD, hearing aids help when they're used with an FM system. In most cases, hearing aids used alone do not help kids with ANSD because they only make the disorganized sound louder.

Cochlear implants usually aren't an option until after kids are at least 1 year old and have tried other ALDs without success. Cochlear implants have helped many people with ANSD, but ongoing therapy after the surgery is crucial for them to be effective. Not all kids with ANSD are candidates for the implants.

In addition to assistive listening devices, kids with ANSD often can benefit from learning visual communication skills. American Sign Language (ASL), Cued Speech, and Signed Exact English are three types of visual communication techniques. You'll work with the medical team to determine which is best for your child.

ASL is the best known form of visual communication. A distinct language with a grammar, vocabulary, and syntax all its own, ASL is meant to be used in place of spoken language.

Cued Speech and Signed Exact English are visual communication techniques that directly translate what's being said. Both are meant to be used with spoken language to help people understand anything they can't comprehend through lip reading.

Cued Speech is a technique in which different hand shapes are placed in various positions around the face to convey — or cue — different consonants and vowel sounds. It involves a limited number of hand positions and shapes, which may make it easier to learn than other methods. Cued speech can be used in any language and can be very useful for bilingual families.

Signed Exact English involves using certain hand gestures to represent sounds and suffixes (like "-ing") and prefixes (like "re-").

By learning as much as they can about communication techniques and working closely with the medical team, parents can play an important role in helping their kids manage ANSD and learn to communicate.

Kids with APD can't understand what they hear in the same way other kids do. That's because their ears and brain don't fully coordinate. But early diagnosis and a variety of strategies can help them.

Ear injuries not only can affect a child's hearing, but sense of balance too. That's because our ears also help keep us steady on our feet.

Hearing may be the ears' main job, but it's not all they do. Learn all about the ears in this Body Basics article.

Working with a certified speech-language pathologist can help a child with speech or language difficulties.

Hearing loss happens when there is a problem with the ear, nerves connected to the ear, or the part of the brain that controls hearing. Someone who has hearing loss may be able to hear some sounds or nothing at all. To learn more, read this article for kids.

Hearing impairment occurs when there's a problem with or damage to one or more parts of the ear. Find out its causes and what can be done to help correct it.

Cochlear implant can help many kids with severe hearing loss. Find out how they work and who can get them.

Knowing what's "normal" and what's not in speech and language development can help you figure out if you should be concerned or if your child is right on schedule.

Now hear this! Here's an article about ears. Find out how your amazing ears do their amazing job.

Going to the Audiologist

When a kid has trouble hearing, an audiologist can help. That's a person specially trained to understand how hearing works and to help kids who don't hear normally.

Find out what this doctor's checkup will involve after your baby arrives.

Hearing problems can be overcome if they're caught early, so it's important to get your child's hearing screened early and checked regularly.